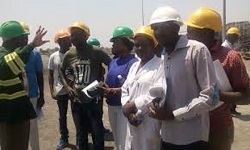 ZIMBABWE – Three foreign companies have been enlisted for the installation of an emergency diesel power plant at Dema substation in Seke as Government moves in to ameliorate power shortages bedeviling the country.

The emergency power plant, being introduced as a stop-gap measure while big power generating projects materialise, is expected to provide 200 megawatts to the national grid.

Installation of the plant will be done at the Dema sub-station and should be complete by February next year.

In a letter to the Chief Secretary to the President and Cabinet, Dr Misheck Sibanda, Energy and Power Development Permanent Secretary Mr Partson Mbiriri said a technical committee was already in place to steer the installation of the plant.

Proposals from the three potential bidders were expected to be submitted on Tuesday while the State Procurement Board has been notified of the development.

“Following Cabinet’s decision that a 200MW emergency diesel power plant be established at Dema substation, Seke, a technical committee has already been constituted and three potential bidders have already been requested to submit their proposals on 10

Though Mr Mbiriri did not mention the three companies, sources privy to the developments disclosed the companies as Agrekko, a European company; APR Energy headquartered in the United States and Altaaqa Global from the Middle East.

All the companies have done successful projects — at short notice —in a number of African countries such as Angola, Cameroon, South Africa, Botswana, Burkina Faso, Gabon, Libya, Mali, Mozambique, Zambia and Senegal.

Tanzania, which announced plans to switch off all hydropower plants last month due to low water levels in its dams, is renting these diesel-powered generators provided by the emergency power suppliers.

The emergency plants are expensive to run and the Ministry of Energy has already notified that beginning February, Zimbabweans have to “bite the bullet” and embrace significant power tariff increases to reduce the load-shedding hours.

Mr Mbiriri said every household had to be on either a prepaid meter or a smart meter.

“It is an established fact that diesel power plants are expensive,” he said.

“Zesa Holdings must prepare for this high operating cost by ensuring that more customers are put on prepaid meters or smart meters.”

Indications are that Government wants to rope in a foreign company to install smart meters on all outstanding points.

The foreign company’s proposal, according to Mr Mbiriri, is to “install the smart meters off Zesa’s poor balance sheet, subject to terms and conditions which are acceptable to Zesa Holdings”.

Consumers are being levied about 9,86c/kWh and the use of diesel generators is likely to see cost moving to 14c/kWh.

The Dema emergency plant will later be complemented by the 120MW that will come from the Mutare Peaking Power Plant, which will take just under 18 months to complete.

The plant is one of the priority projects targeted under Zim-Asset and Zesa engineers have done due diligence on Ansaldo Energia, the Italian company that will supply the contractor, Helcraw Electrical (Pvt) Ltd, with equipment.

A ground-breaking ceremony is expected soon to pave way for construction.

The country has been experiencing acute power outages due to the low water levels at Kariba Dam with some residents going for up to 18 hours a day without electricity.

Zimbabwe is generating half of the required 2 200MW and is working on various other projects, including expansion of existing power plants that will produce over 3 000MW in the next six years.

The projects, some of which are funded by the Chinese, are worth an estimated $5 billion and are in line with the provisions of Zim-Asset.

ZIMBABWE - Three foreign companies have been enlisted for the installation of an emergency diesel power plant at Dema substation in Seke as Government moves in to ameliorate power shortages bedeviling the country. The emergency power plant, being introduce...
Share via
x
More Information