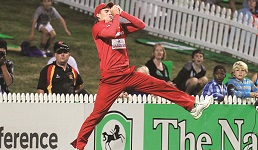 ZIMBABWE – THE delay by Zimbabwe Cricket (ZC) in announcing substantive coaches for the national Under-19 team is now threatening to hamper the team’s preparations for the Under-19 Cricket World Cup to be held in Bangladesh early next yearZimbabwe, who recently announced their preliminary 36-man squad for the global showpiece, was expected to tour Bangladesh in November for a fine-tuning tour, but due to the delay preparations have now come to a standstill.

Zimbabwe A, which is also supposed to play Ireland in a four-day match from October 17-20, is also yet to start preparations, as the substantive coaches team are also yet to be officially named.

However, it is the national Under-19 team, which has been most affected, as their rivals have been intensifying preparations ahead of the youth global showpiece on the subcontinent.

Bangladesh, who will host next year’s edition of the Under-19 World Cup, which takes place from January 20 to February 14, recently toured South Africa, while other teams have been holding training camps ahead of the competition.

Cricket sources told NewsDay Sport that the ZC board met last Friday to deliberate on the appointment of coaches for the national Under-19s and the Zimbabwe A team.

However, the final decision is yet to be officially communicated, as the newly-appointed ZC board chairman Tavengwa Mukuhlani is currently out of the country.

Long-serving Zimbabwe Cricket development coach Ian Tinker took charge of the Zimbabwe Under-19 cricket team when they played Namibia in January in the absence of Walter Chawaguta who travelled with the senior team to the World Cup.

Shepherd Makunura was in charge of the Zimbabwe A when they took part in four limited overs matches against Canada in January, but it is also unclear whether he is going to be retained.

ZIMBABWE - THE delay by Zimbabwe Cricket (ZC) in announcing substantive coaches for the national Under-19 team is now threatening to hamper the team’s preparations for the Under-19 Cricket World Cup to be held in Bangladesh early next yearZimbabwe, who r...
Share via
x
More Information