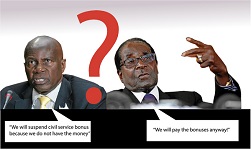 ZIMBABWE – April 13, 2015, Finance Minister Patrick Chinamasa, flanked by the then Information minister Jonathan Moyo and Information secretary George Charamba hold, a press conference to announce that government had suspended bonus payments to civil servants for 2015 and 2016.

Aware of the austerity measures government needed to take to resuscitate the economy, economists quickly welcomed the move, which was in line with an IMF Staff monitored program the Zimbabwe government was undertaking.

But five days later, during an Independence Day address , President Robert Mugabe announced government would go ahead and pay bonuses to civil servants in what analysts said was a populist move meant to please the public service at the expense of the country’s ailing economy.

To avoid a confrontation with his boss, Chinamasa admitted Mugabe had the final word on government issues.

Sources in government have indicated Treasury is broke and has no capacity to pay the civil service bonuses, in what could be a vindication of Chinamasa.

Both Mugabe and Chinamasa have avoided talking about the issue of bonuses lately.

Mujuru camp : Mliswa is not one of us

Konono charged by court for assaulting his friend