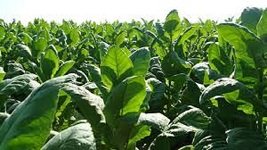 ZIMBABWE – Zimbabwe’s tobacco output may decline by at least 10 percent this year, due to the late start of the cropping season and the effects of El-Nino induced drought, Tobacco Industry and Marketing Board chief executive Mr Andrew Matibiri said yesterday.

Last year, the country produced nearly 200 million kilogrammes, down from 216 million kg produced a year earlier, the record tobacco output in just over a decade.

“We will obviously be down by at least 10 percent this year,” said Mr Matibiri without providing the actual figures. “As you know the season has not been so good for us.”

Early this year, Dr Matibiri said the El-Nino effect came with prolonged dry and very hot weather during the transplanting phase of the crop and this decimated crops that could not be irrigated.

Farmer organisations, however, believe the crop size could range between 160 and 180 million kg.

“The reduction in the crop is mainly due to the poor season,” Zimbabwe National Farmers Union vice president Mr Garikayi Msika said in an interview.

“The issue of drought became known as far back as July last year, so many dry land farmers reduced their planned hectarage. Tobacco contractors were also very cautious.”

Zimbabwe earned $855 million from tobacco exports in 2015, about 11 percent higher than the previous year on higher prices and demand from China, according to the TIMB.

This makes tobacco the country’s single largest export commodity, ahead of gold and platinum.

While tobacco output will decline, the quality could be better, particularly the irrigated crop, Zimbabwe Research Board director Dr Delia Garwe said in an interview yesterday. Out of 91 160ha planted last season, about 15 000ha were put under irrigation.

The TIMB has not yet announced the opening date for this year’s selling season.

The Southern African region is bracing for a humanitarian crisis due to the worst ever drought induced by the El-Nino weather phenomenon, last recorded in almost two decades.

In recognition of the potential impact of the El-Nino induced drought on tobacco output, the Government reduced tobacco levy from 1,5 percent to 0,75 percent,” Finance and Economic Development Minister Patrick Chinamasa said in the 2016 National Budget.