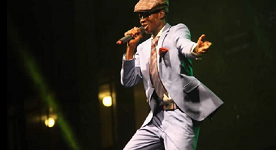 ZIMBABWE – Tocky Vibes is finding the going tough and failed to land any shows in Harare during the just-ended festive season, amid claims by his camp that a certain top musician (name withheld) is using juju to thwart his rise.

Tocky had a forgettable 2015, failing to maintain the standards he set in 2014 with trailblazing hits that took the nation by storm.

A close band member said Tocky Vibes had vowed not to share the stage with the musician who he accuses of causing his misfortunes.

“He has tried to be on top of his game but after a spate of incidences with the musician, Tocky Vibes concluded that the musician was using juju on him,” said the source.

“At one of the shows, his voice even faded when he shared the stage with the musician. He was cross and tried to chase the musician off the stage.

Tocky Vibes’ manager Elvis Bokosha refused to comment on the issue, opting instead to outline their plans for 2016.

“Yes, we did not have any shows in Harare during the festive season and we are on January break,” Bokosha said.

“Tocky is going to release an album this year and we are going to have international tours in Australia and the UK.”

An investigations by this reporter showed that, just like soccer players, musicians often frequent sangomas or prophets to better their fortunes.

Sungura singer Romeo Gasa acknowledged that most musicians use juju to rise.

“Most musicians use juju or consult prophets to improve their fortunes while others perform rituals before they get on stage,” said Gasa.

“I have vowed that I will not do that. I prefer to live in a thatched mud hut than be popular using juju or supernatural things.

“I don’t care about being poor, as long as my conscience is clean before God.”

The incident comes at a time when most musicians who are experiencing waning fortunes are flocking to Pentecostal churches to have their fortunes revived.

Among the musicians who have found the going tough and sought solace in deliverance are Allan Chimbetu, Nicholas Zakaria, Taso and Maskiri, who are all regulars at Walter Magaya’s Prophetic Healing and Deliverance Ministries.

Raunchy dancer Beverley Sibanda has hopped from one church to another in a quest to find salvation and to revive her career.

ZIMBABWE - Tocky Vibes is finding the going tough and failed to land any shows in Harare during the just-ended festive season, amid claims by his camp that a certain top musician (name withheld) is using juju to thwart his rise. Tocky had a forgettable 201...
Share via
x
More Information