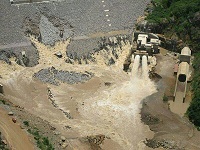 ZIMBABWE – Government has started mobilisation of $60 million required to complete Tokwe-Mukosi Dam in Chivi District, with construction work on the stalled project expected to resume next month.

Work on the dam stopped in December 2014 after the main contractor, Salini Impregilio, downed tools and demobilised most of its equipment, demanding $57 million in outstanding payments.

Tokwe-Mukosi Dam was about 90 percent complete when Salini, an Italian company, stopped work and withdrew most of its staff and equipment to other construction projects across Africa.

Among the outstanding works was the fortification of the upstream side of the dam wall, right bank spillway tunnel and water outlet valves to enable water to pass through the wall.

Water that had accumulated in the dam had to be drained as the reservoir could not store water before the electrification of the outlet valve system.

Government raised hope that work on the dam would resume in October last year after releasing $30 million towards for resumption of work.

Zinwa corporate communications and marketing manager Mrs Marjorie Munyonga on Thursday said a further $60 million was needed to complete outstanding work at the dam and clear arrears to Salini.

She said construction work will only resume at the end of March when the rainy season will be officially over so that there are no disruptions.

“Work on the construction of Tokwe-Mukosi Dam is expected to resume soon after the rainy season. This is so because part of the outstanding works, which is the outlet works, cannot be carried out while there is still some water passing through,’’ she said.

The contractor is expected to move on to the site at the end of March, by which time the rainy season would be winding up.

In the meantime, efforts are being made to mobilise the remaining $60 million, which will go towards the completion of the dam and settling the outstanding amount owed to the contractor.’’

Mrs Munyonga expressed optimism that Tokwe-Mukosi would be completed this year subject to availability of resources.

Work has been continuing on the project over the past 17 years but progress was repeatedly being drawn back by lack of funds blamed on illegal economic sanctions imposed on Zimbabwe by the West.

Tokwe-Mukosi will cost $255 million and is being wholly financed by the Government of Zimbabwe and the dam will have the potential to irrigate over 25 000 hectares.

ZIMBABWE - Government has started mobilisation of $60 million required to complete Tokwe-Mukosi Dam in Chivi District, with construction work on the stalled project expected to resume next month. Work on the dam stopped in December 2014 after the main cont...
Share via
x
More Information