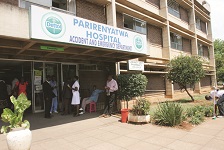 Nherera passed on at Parirenyatwa Hospital in Harare yesterday morning after a long battle with cancer.

Tongogara’s daughter, Sukai, confirmed the death yesterday, saying the deceased was her mother’s younger sister who sired a son with the national hero.

“There is a bereavement in the family. My mother’s sister Anita passed on this morning at around 3am after losing her battle with cancer,” she said.

Sukai said no funeral arrangements had been made yet as the family was still waiting for elders in the Nherera family to first meet.

“My mother is alive. It is her sister who passed on, but she had a son with Tongogara — Simba,” she said.

Tongogara died in Mozambique in 1979 as he was driving back home after the liberation struggle.

Zim: Between the Rhodesian peril and new politics