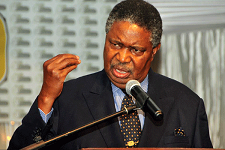 ZIMBABWE – Most Zanu PF members woke up to a 2015 that was characterised by brutal purges on members alleged to have been working with former Vice-President Joice Mujuru in an alleged plot to unseat President Robert Mugabe.

Votes of no-confidence flew from one end to the other. Party members were living precariously; gripped with anxiety on whether they would survive for another day in office.

The big axe was always hovering above their heads, and they had to be more enterprising to survive.

Bootlicking became the art of survival in Zanu PF, with Mugabe in most instances being the biggest recipient of statements of praise for his “visionary leadership, iconic wisdom”, among other expressions.

After changes to the Zanu PF constitution at the party’s congress in December 2014 that gave Mugabe sweeping powers under the guise of creating one centre of power, a lot of threatened members turned to Mugabe for survival.

Bootlicking skills were further sharpened, and Mugabe and his wife Grace were again the prime beneficiaries of praise worshipping without limits.

Possibly taking notes from the late Tony Gara, one of the pioneers of bootlicking who equated Mugabe to Jesus as early as the 1990s and was rewarded with a ministerial position, party members have perfected the art to either survive or get promotion.

Below are major characters and highlights of the bootlicking crusade that swept Zanu PF from top party members singing for their supper.

Little known before he was catapulted to the VP post, Mphoko has decided to pay his appointing master by singing praises to him and his wife at the slightest opportunity.

Before Mugabe’s infamous fall at Harare International Airport in February, Mphoko described his boss as a cistern of wisdom, moving a notch higher by asking all placard-waving supporters to raise them higher so that he could read them one by one and turned to Mugabe, told him that all the messages on the placards described who he was.

“I want to teach you this slogan, if I say ‘dura reruzivo’ (cistern of wisdom), you say VaMugabe,” Mphoko said.

Mphoko took pains to defend Mugabe over Gukurahundi, claiming it was only a Western conspiracy.

The VP then turned to Mugabe’a wife, Grace, for praise, addressing her as Her Excellency, placing her at par with Mugabe without shame and vowing to respect her claiming when he took an oath of office before Mugabe, it included his wife and family.

“I want to correct a misconception once and for all. Vice-President Mnangagwa and I are just Vice-Presidents who must be addressed as Honourable.

“However, the First Lady is as good as the President and must be addressed as Her Excellency,” Mphoko told Zanu PF supporters in Rushinga after doing the dishonourable task of introducing Grace.

Mnangagwa surprised many people when he knelt before Mugabe and his wife Grace soon after his appointment to the VP position.
A long-time Mugabe ally, Mnangagwa took bootlicking to new levels two months after his appointment moments after Mugabe’s infamous fall from a podium at Harare International Airport. Mnangagwa described Mugabe as “mountain of mountains”, “head above all heads” and a “cistern of wisdom”, among other terms.

In his welcome remarks, Mnangagwa said Africa would be in safe hands under the stewardship of Mugabe, who had just taken over as the new African Union chairman.

“”As Zimbabwe, we are proud. You have your head above all heads, you are a mountain of mountains,” Mnangagwa fawned before Mugabe took to the podium. “I want you to greet the people and tell them who rules Africa. I saw you sitting in your AU office and said, ‘now listen, the man is now running Africa’. Your first statement was to say Africa is for Africans and that is the spirit of the founding fathers.”

Against our tradition that prohibits kneeling before a woman, Chombo made himself a subject of ridicule when he knelt before Grace in June.

Just last week, Chombo said Grace had a Midas touch that had guided the Zanu PF women’s league to become the most vibrant organ of the party. He said her dedication to party work was unparalleled.

Chombo also sang praises for Mugabe, at his birthday celebrations in February, describing him as a virtual demi-god for about 10 minutes, after which he lamented the time was not enough for him to exhaust his description of the iconic Mugabe.

“The master of ceremonies here has given me limited time and I can no longer say all the superlatives to describe this man,” Chombo told a gathering of Zanu PF ministers and other bigwigs.

Phillip Chiyangwa, who used to claim to be Mugabe’s nephew before he claimed that the 91-year-old was his brother, said the veteran leader was a computer who knew what one wanted to say before he said it. He said Mugabe could never be hoodwinked by money.

“My brother is a socialist. He is not a money man. Those who try to impress him using money and material things will find him unmoved,” Chiyangwa said.

“That is just who he is—a socialist. He regards highly those who create conditions for others to flourish. When you discuss matters, he can look through you in an instant. His mind is like a computer, he analyses you straight away, even before you start talking up to the point you finish. This is the kind of gift he has.”

The Mashonaland Central province resident minister hogged the limelight when in February he praised Mugabe for choosing Grace as his wife at a meeting that later turned out to be a bootlicking contest between him and Chombo.

But Dinha stole the limelight.

“The sky is the limit, keep on with the projects and I assure you, we will give you more land when you want it,” Dinha said.

At another meeting in Mazowe, Dinha defended Grace’s controversial PhD: “I went to Amai (Grace) two years ago with a sociology book, (written by) Haralambos and we argued on a topic. If I was not a sane person, I would have made it public that Grace is studying for a PhD.”

That was after he grovelled at Grace when introducing her to the Zanu PF supporters gathered at her orphanage home: “I am not fit to untie her shoes or stand to introduce her. Like her, vilify her, but you can’t take the beauty of a fresh bouquet of roses.”

He described Grace as a philanthropist par-excellence, courageous, intelligent and strategist, among other adjectives.

The Psychomotor minister who is known for his allegiance to Mnangagwa, after Mnangagwa was appointed VP, could not hide his joy at the possibility that his boss could eventually take over from Mugabe. He immediately referred to Mnangagwa as Jesus.

Introducing Mnangagwa to party supporters at his Zvishavane home after his elevation to VP, Hungwe went into overdrive, showering Mnangagwa with colourful adjectives and likening him to “The Holy Son of Man”. He said his rise was planned by God.

“This man who has been made VP has various names that we all know, but some of the names you don’t know them…He is known as the Son of Man…I can tell you that I received several texts from Bishop Andrew Wutaunashe (leader of the Family of God Church) telling me that the Son of Man will be ordained VP way before these things happen and I just told him that I had heard him because I know he is a Man of God,” Hungwe said.

ZIMBABWE - Most Zanu PF members woke up to a 2015 that was characterised by brutal purges on members alleged to have been working with former Vice-President Joice Mujuru in an alleged plot to unseat President Robert Mugabe. Votes of no-confidence flew from...
Share via
x
More Information