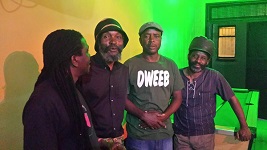 ZIMBABWE – Reggae became more popular in Zimbabwe because of its message, which advocates for black emancipation which was ignited by the late Robert Nester Marley on April 18 1980 when he graced Zimbabwe’s first independence celebrations at Rufaro Stadium.

It was the song Zimbabwe by Marley which raised the conscience of many before the genre extended its roots within the people’s hearts and from that time, reggae music stole the limelight in Zimbabwe.

As the euphoria gripped Zimbabwe, the country in 1988 witnessed the birth of a new reggae outfit — Transit Crew.

The group, now popularly referred to as “Madhara Ereggae”, has stood the test of time. Despite the revolution of music, Transit Crew has kept reggae music alive.

The elderly members — Munyaradzi Nyemba, Samaita Zindi and Antony Liba — have gone through a lot, which included the departure of some key band members. The closure of Mannenburg and Book Café, their hunting grounds, was another setback. However, through determination, the group has surprised all and sundry and is up to today one of the best reggae outfits in Zimbabwe.

According to Nyemba, the story behind the group’s success is none other than the love of the genre.

“The unity that we have as seniors in the band plays a major part. Our willingness to impart what we know to younger musicians and our fairness in sharing what comes from our earnings are the reasons why Transit Crew still exists,” said Nyemba.

“[It’s] the love for reggae music brother. Then you just check how to make the band survive.”

He said the mass exodus of lead vocalists did not affect his team as it was their objective to groom youngsters.

“We have parted ways with a number of vocalists amicably. Transit Crew is a train, you board it and when you reach your destination, you disembark. Those who left are free to come back into the group again because they are part of the family,” said Nyemba.

“In other words, we are not much worried about the departure of the vocalists, it is our mission to groom youngsters who are the future of reggae music.”

One member of Transit Crew Emmanuel Motsi, who had left, is back and is now the lead singer. Motsi, popularly known as Mannex, left the band and formed his own MoFamilee Crew before re-joining the “elders”.

Motsi, who is the man behind the song Rozi, which put Transit Crew on the map in 2009, had earlier left the band before travelling to Europe where he settled in the Czech Republic.

“Transit Crew is a reggae group. We are the custodians of the beautiful genre in the country. As ‘elders’ of the group, our vision is to see the genre being kept alive by our own children whom we work with,” said Nyemba.

“We are moved by the love of the music, we are not in a competition with anyone but to entertain those who love the music. We have dancehall, sungura and urban grooves, but we have our own way, that is playing reggae music. We are glad that a number of entertainment joints are after us and we are there to deliver.”

Transit Crew, undoubtedly the oldest reggae band in the country, had the privilege of playing alongside Joseph Hill (Culture), Eric Donaldson, and Ijahman Levi, who were all backed by Rough Cuts Band, during their tours of Zimbabwe.

The group has visited South Africa, Japan, the United Kingdom and has been a supporting act for a number of international artistes such as Misty in Roots, Dennis Brown, Luciano and Mickey General in Jamaica, UK poet Zephaniah Benjamin, Jamaican dub poet Yasus Afari and the late Lucky Dube.

Currently, the group is in the studio recording a new album.

ZIMBABWE - Reggae became more popular in Zimbabwe because of its message, which advocates for black emancipation which was ignited by the late Robert Nester Marley on April 18 1980 when he graced Zimbabwe's first independence celebrations at Rufaro Stadiu...
Share via
x
More Information