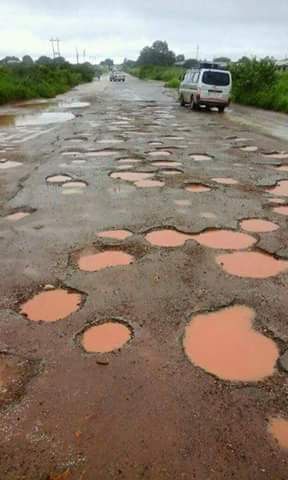 HARARE – Cabinet says the Ministry of Transport will now take over the rehabilitation of roads in some urban areas as the road situation around the country has worsened over the years.

Government recently declared the roads situation in the country a “state of disaster.”

The Emergency Road Rehabilitation Programme will see the government taking over 70 roads roads from local authorities across the country.

Information minister, Monica Mutsvangwa told the media during a post-cabinet brief on Wednesday that sufficient resources had been mobilised for works on “high impact” roads.

“Cabinet was informed that as the programme gathers momentum, sufficient resources have been mobilised for works on critical, high impact roads to commence in earnest,” Mutsvangwa said.

Mutsvangwa said a sixth contractor was being engaged to work on the upgrading of the Harare-Chirundu highway.

“Cabinet agreed that a sixth contractor to implement the upgrading of the Harare-Churundu highway a lonalongnorth-south corridor be engaged to immediately commence work. This development will complement work already taking place along the Harare-Beitbridge highway,” she said.

She added that the ministry was also aiming at constructing 8 more vehicle inspection depots by 2024 and computerised driver’s learning testing facilities in 19 centres by 2023.

Central government and local authorities have been at loggerheads blaming each other over the state of the country’s roads.

While the government has blamed councils for the bad roads, the local authorities have pointed out that the road agency ZINARA responsible for collecting road toll fees does not provide adequate funds for sustainable road maintenance.

HARARE - Cabinet says the Ministry of Transport will now take over the rehabilitation of roads in some urban areas as the road situation around the country has worsened over the years. Government recently declared the roads situation in the country a 'sta...
Share via
x
More Information