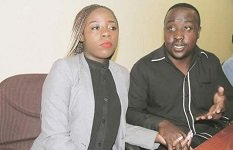 ZIMBABWE – She was called all sorts of names, received death threats, assaulted, laughed at and humiliated by people from all corners of the world for a crime she did not commit.

For two nights, she slept in an uncomfortable jail cell alongside other suspects.

Newspaper headlines and bills screamed her name and the “crime” she had allegedly committed.

While other people have nightmares when they go to bed, hers began on the morning of Tuesday February 23, when she discovered that her name was plastered on several social networks, for all the wrongreasons.

While the courts have cleared her of the alleged crime, she believes it will take a miracle for her to recover from the trauma.

Mushunje together with the toddler tested HIV negative, prompting the State to withdraw charges against her.

Yesterday, she opened up to The Herald and could not hold back tears as she narrated how her life took a dramatic turn, emotionally, psychologically and physically.

In the company of her identical twin, Takudzwa, her boyfriend Collin Kanonge, paternal aunt Fungai Mushunje and her lawyer Fungai Chimwamurombe, Tafadzwa said she was devastated.

What shocked her most was how she was judged on social media when the allegations went viral and also when police arrested her.

“I was surprised to wake up with loads of messages on my cellphone from people I did not know. They insulted me and called me a husband snatcher. They said that I had infected my boyfriend’s three-year-old son with HIV. I was shocked because I did not know where this was coming from.

“That is when Takudzwa came to me and told me that our uncle had told her to read a story posted on a website called Musvo Zimbabwe. We then read what had been posted and laughed about it thinking it was a joke. When the story went viral, and when the messages on my phone piled, I realised that it was a serious issue,” she said.

Tafadzwa said the first person she told was her boyfriend, Collin, who advised her that they should make a report to the police.

She, however, said they did not know who was behind the malice hence it was difficult to make a proper police report.

“Later that day I received a message from Tracy (baby’s mother) asking me why I had infected her son, she called me all sorts of names. Her (Tracy’s) mother also sent me messages threatening to make my life miserable adding that she was going to kill me,” she alleged.

Later that evening, Tracy allegedly went to Tafadzwa’s house in the company of the police and a group of people. Tafadzwa was arrested.

“Imagine I was whisked away to the police cells with the mob calling me names,” she said while crying uncontrollably.

Collin, who sat next to her throughout the interview, calmed her down and she continued.

“I was taken to Glen Norah Police Station and my family was ordered to remain outside. Tracy, police officers and myself sat in the office.

“The police asked me if I knew anything about the issue and I told them I was in the dark. They further asked where I had sourced the injection from. I told them that I did not know anything about it. Suddenly Tracy stood up and started assaulting me, I was helpless; all I could do was to cry,” she said.

She added that her family rushed into the office when they heard Tracy insulting and assaulting her.

“They quizzed the police why they were letting Tracy assault me.

“My family advised me to make an assault report against Tracy and a docket was opened,” she explained.

Both Tracy and Tafadzwa spent the first night behind bars.

“We both appeared in court on Thursday, Tracy was charged with assault while I faced a more serious charge of deliberate transmission of HIV.

“Tracy will be back in court on Friday,” she said.

Tafadzwa said this was not their first bad encounter as before the media lashing, Tracy had threatened her.

At one point, she said, Tracy sent her threatening messages saying she would make sure that she got bad publicity.

Tafadzwa added that she loved Collin’s son with all her heart and would never do anything to hurt him.

But, it is love that Tracy never saw as ironically, Tafadzwa was arrested on the child’s birthday after spending a fun- filled day with him and Collin.

“The day I was arrested was the child’s birthday and I spent time with him and his father at Tamba Tamba Children’s Playcentre at Chisipite. The previous weekend we had spent the day buying the child birthday gifts. I love this child.

“I am grateful to people who stood by me especially my family and the Kanonges and, above all, God who rescued me,” she said.

She added: “When the story came out nobody wanted to be associated with me, so I have learnt that family will never leave you no matter what. My friends abandoned me and they were asking each other if it was true. Some even doubted my innocence.

“The society was too quick to judge me. They judged me yet I was the victim.”

With tears trickling down her cheeks, her twin sister, Takudzwa, interjected: “Imagine for two days she was not eating as she was in police cells. I did not eat either for those two days and at one point I asked the police if I could be with her in the cells but they said it was impossible.”

Collin said the whole incident was a big blow to his relationship with Tafadzwa adding he understood what she was going through.

He said he never legally or customarily married Tracy but only sired a child with her three years ago.

“I will continue supporting my girlfriend, I love her so much and after all this has happened, my love for her is now much stronger. I knew these were all lies because we had been tested for HIV on January 8 this year as our New Year’s resolution,” he revealed.

Collin explained that his relationship with Tracy was not rosy adding that they have a pending matter at the Civil Court where he is seeking a peace order against her.

Tafadzwa’s aunt, Fungai, said she stood by her niece because she knew her hands were clean.

“We are leaving the matter in our lawyer’s hands, he will tell us the way forward. The truth is we were deeply hurt. My niece was traumatised, but only God knows,” she said.

Tafadzwa’s lawyer, Mr Chimwamurombe, said he was not going to pre-empt their next move but hinted that very soon they would approach the courts.

“Everyone has the right to be protected at law. I believe inasmuch as it seems to be hard to point the name of the person who caused this, we are in the process of identifying the person behind all this,” he said.

While the storm seems to have calmed, Tafadzwa says she still has a daunting task – one of clearing her name for the Internet footprint has tarnished her image.

ZIMBABWE - She was called all sorts of names, received death threats, assaulted, laughed at and humiliated by people from all corners of the world for a crime she did not commit. For two nights, she slept in an uncomfortable jail cell alongside other suspe...
Share via
x
More Information