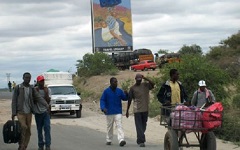 ZIMBABWE – Travellers at Beitbridge can expect to spend at least three hours on the Zimbabwean side of the border post.

Half a million people have already gone through Beitbridge since the beginning of the month.

Zimbabwe’s official Herald Newspaper says they’re not all heading in one direction.

This is by far the busiest time of the year for Beitbridge and Zimbabwean officials are trying to separate travellers into different queues, depending on whether they’re travelling in private cars, on buses or if they’re pedestrians.

Unconfirmed reports say a temporary import permit for those wanting to take a car into Zimbabwe is now R800.

ZIMBABWE - Travellers at Beitbridge can expect to spend at least three hours on the Zimbabwean side of the border post. South African Revenue Service says at least 31,000 travellers are now crossing Beitbridge daily as holiday traffic reaches its peak. H...
Share via
x
More Information