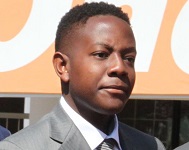 ZIMBABWE – The men yesterday appeared in court facing allegations of stealing a cellphone belonging to President Mugabe’s son, Bellarmine Chatunga, at a function at St Jones College in Harare.

Victor Josam, 26, Tendai Makambaire, 30 and Kelvin Mwandayi, 27 appeared at the Harare magistrates’ court facing theft charges.
Josam resides at 6824 Western Triangle in Highfield, Makambaire resides at No.11349 Budiriro 2 whilst Mwandayi resides at No. 17104 in Stoneridge.

The trio was not asked to plead to the charges of stealing Chatunga’s I-phone 6 when they appeared before Harare provincial magistrate Vakayi Chikwekwe who remanded them out of custody on US$100 bail.

State counsel, Venancia Mutake, had opposed granting bail to the three saying they were facing a serious offence.

Prosecutor Mtake also argued that there was overwhelming evidence linking the trio to the offence they are facing.

“The accused are facing a serious offence which involves a cell phone valued at US$1 500. They are likely to face custodial sentence upon conviction, which may induce them to flee from the jurisdiction of the court.

“There is also overwhelming evidence against the accused,” she said.

Josam, who was not legally represented, told the court that he would not abscond trial if granted bail.

He told the court that he never attempted to flee from the police upon his arrest.

“When I was arrested I never attempted to escape. If granted bail, I would be able to work for my family.

“I stay at my father’s house and I managed to locate the person who stole the phone when we were at Remand Prison and he admitted that he sold the phone to me after stealing it,” he said.

Makambaire, through his defense lawyer Aurthur Gurira, told the court he did not steal the phone and the State should have treated him as a witness.

Lawyer Gurira said Makambaire was not a flight risk and would not abscond trial.

“The accused is an unsophisticated 30-year-old who is in the business of buying and selling. He has not been in prison prior to this case and he is a stranger to the court.

“Accused denies this offence and would submit that he did not steal the cell phone in question as alleged by the State.

“He was implicated for having been in possession of the same at some point.

“The accused has a plausible defense and as such he should be a State witness and apparently putting to terms that the person is at Remand Prison,” he said in bail application.

Mwandayi, through his defense lawyer, told the court in his bail application that he bought the cell phone in question from Makambaire who had bought it from Josam.

“The accused bought the phone from 2nd accused who had bought it from 1st accused. The Investigating Officer confirmed the chain. The accused took the cellphone to the police station when he was invited by the police.

“He would not abscond trial if granted bail,” he said.

Circumstances leading to the trio’s arrest are that on November 7 last year St Jones College hosted a students’ function.

It is alleged that Josam, Makambaire, Mwandayi and another person, who is still at large, hatched a plan to steal from Chatunga.

The court heard that Chatunga in the company of his friend, Honour Mukudzei Rwodzi, went to the toilet.

He was in possession of his I-Phone 6, according to the State.

It is said that upon reaching the toilet, Chatunga gave his friend the cellphone as he entered the toilet.

The court heard that it was during the time Chatunga was in the toilet that Josam, Makambaire, Mwandayi and their alleged accomplice approached Honour Mukudzei Rwodzi.

Reports are that they lied to Mukudzei that they had been sent by Chatunga to collect the cell phone.

An unsuspecting Mukudzei handed over the cellphone before they disappeared into the crowd.

Josam, Makambaire, Mwandayi were later arrested and taken to court charged with theft.

They are expected to return to court on March 7.