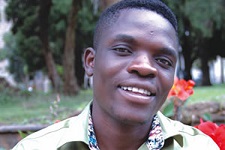 Tryson has been talking of a new album for more than a year and it seems he is now ready for his ‘victory’.

The musician through his manager Shepherd Machakanja told H-Metro that everything is now in place for the launch which will be graced by several musicians and other Chimbetus of song.

“The launch is going on as planned and tomorrow (tonight) is the day. We are expecting people to come in their numbers as we give them our new album.

“We have engaged several musicians who all confirmed their presence as well as all the Chimbetus and we are very confident that things will go according to plan,” he said.

The album carries eight tracks with a track which Tryson claims to have written while in the dreamland.

The musician claims to have met the late dendera music co-founders Simon and Naison Chimbetu which forced him to name the song Ndarota.

He is tipping it (song) to be among the people’s favourites which comprise of tracks like Chihera Vhura Door and Isa Moto.

“It is always good to have confidence with your project before you give it to the fans and that is situation with me.

“I am very certain that the album will make a huge impact,” Tryson.

ZIMBABWE - Musician Tryson Chimbetu will tonight launch his fifth album titled Victory (Ballon d’Or) at Radost Platinum in the Longcheng Plaza tonight. Tryson has been talking of a new album for more than a year and it seems he is now ready for his ‘vi...
Share via
x
More Information
x