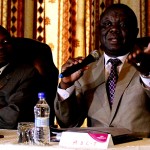 ZIMBABWE – The fall out between MDC-T Kuwadzana legislator Nelson Chamisa and party president Morgan Tsvangirai has reportedly deepened with the former prime minister on Monday accusing the youthful lawyer of trying to depose him. Tsvangirai, according to reports, told MDC-T supporters in Chitungwiza that some members of his party were pushing for a fresh congress to push him out of the presidency.

Chamisa lost the race for the secretary general’s post to Douglas Mwonzora in the party’s congress last October in the aftermath of the breakaway by Tendai Biti and 20 other MPs to form MDC Renewal and later People’s Democratic Party. The loss was interpreted in some sections of the party as an indication of a fall out between Chamisa and Tsvangirai after the former organising secretary was accused of being too ambitious and a threat to the presidency.

The conspiracy theory was further fuelled after Mwonzora went to the congress an underdog having only been nominated by Manicaland out of the party’s 12 provinces. The Manicaland nomination was shrouded in controversy after Tsvangirai was accused of interfering in the process to have Mwonzora nominated.

Sources say matters came to a head when party youths affiliated to warring factions openly clashed at the burial of Harare Deputy Mayor Thomas Mazuva in Wedza at the weekend where some started chanting “cobra” in reference to Chamisa whom they accused of being a “snake.”

The sources also said Tsvangirai had been caught up in a fight between two rival factions – one reportedly linked to Chamisa and another to deputy party president Thokozani Khupe. The factions, according to insiders, are both looking at a post Tsvangirai era as they believe that he won’t be able to garner votes in the 2018 elections.

The Khupe grouping reportedly includes the likes of Mwonzora and Theresa Makone who are both said to be interested in the party’s presidency.

“The Khupe faction has told Tsvangirai that Chamisa is working with some elements within the party to topple him from the presidency. There is now bad blood between the two as Tsvangirai now views Chamisa with suspicion and distrust as he has bought the allegations raised by the Khupe-led grouping,” said a source.

“Allegations are that there are councillors and Members of Parliament on the ground campaigning for Chamisa’s rise and all that has been brought to Tsvangirai’s attention,” said another source. A source close to Chamisa said the Khupe faction was changing structures and getting rid of pro-Tsvangirai members.

“Khupe betrayed her ambitions in the second prayer meeting held for Itai Dzamara in Chitungwiza when she altered the party slogan. Instead of saying the usual ‘Tsvangirai is going to State House’ in her address, Khupe said ‘someone is going to State House,” said the source. “They want to use Chamisa as a decoy but they’re the ones plotting to unseat Tsvangirai. The problem with Tsvangirai at times is that he is gullible and tends to listen to anything without sifting through the information.”

Chamisa was not reachable for comment but party spokesperson Obert Gutu yesterday dismissed Monday’s reports as lies saying there was no plot to unseat Tsvangirai. Gutu said the reports were “fabrications” of the media, “and we were taken aback when we read that report.” The MDC-T spokesperson also dismissed reports that some youths denounced Chamisa at the weekend.

“These are some of the fabrications, there is nothing like that. No one is plotting against the president, we’re all united behind the leadership of Tsvangirai,” he said.