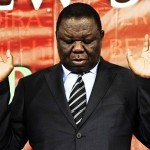 Opposition MDC-T leader Mr Morgan Tsvangirai yesterday admitted he was in discussions with expelled former Vice President Dr Joice Mujuru for a possibility of working together in a bid to dislodge President Mugabe and Zanu-PF from power in 2018.

Working with the opposition to undermine Zanu-PF was one of the charges Dr Mujuru faced as she was fired from Zanu-PF and Government.

However, Mr Tsvangirai said they had not reached a point of negotiating for a coalition given that Dr Mujuru was still to form a political party. “How is it a coalition when the people involved have not even discussed the issue . . . discussions about discussions are not coalitions, any coalition is based on institutional relations not individuals,” said Mr Tsvangirai in an interview with ZiFM last night.

“Mai Mujuru has not launched a party. You can’t talk of a coalition of Mujuru and Tsvangirai when she has no party.”

Mr Tsvangirai did not rule out the coalition with Dr Mujuru saying: “It is not cast in stone. We are open to discussion. We are open to converse about what are the possibilities for the country . . .”

On whether he was ready to deputise Dr Mujuru in the event of an opposition coalition winning the election, Mr Tsvangirai was evasive, pointing to a potential leadership tussle should westerners who are believed to be trying to get Tsvangirai and Mujuru together have their way.

He said coalition partners would have the mandate to decide who among them should be the leader of the country.

Turning to the presidential term limits, Mr Tsvangirai said he was not prepared to stand down as long as his supporters showed confidence by retaining him.

Mr Tsvangirai has been at the helm of the MDC-T for 16 years now after tinkering with his party’s constitution. The party holds congresses every five years to choose their leadership and Mr Tsvangirai has always manipulated his way to stay in power.

“I can’t stand up there and say because some people feel that I have stayed long when my own congress feel they have confidence in me,” he said. “It flies in the face of democratic principles of subjecting yourself to the voice of the people.”

This resulted in some listeners slamming Mr Tsvangirai that if he could not run his party democratically, how would people expect him to run the country democratically.

Mr Tsvangirai in the interview also denied links with the US saying his party had roots in Zimbabwe.

But there was time when Mr Tsvangirai was forced to participate in the elections by the US government, arguing that would he expect to rule the country if he boycotted elections. In what appeared to be confirmation of the US’ growing displeasure at Mr Tsvangirai’s leadership style, Mr Gregory Simpkins, a director in the Subcommittee on Africa, Global Health, Global Human Rights and International Organisations, said local opposition parties could not criticise a system that they were not part of.

Mr Tsvangirai had vowed his party would not participate in any polls without electoral reforms amid reports that the former trade unionists had fallen out of favour with most of his party Western funders.

“Often times we have heard the opposition saying it is tough to compete, they have to find a way of being effective rather than just saying it is too tough to compete so we are not going to take part. If you do not take part in an election process, how can you criticise something that you did not even test?” Mr Simpkins queried

At the time Mr Simpkins made the remarks, he was in the country as part of a two-man US Congress delegation on an investigatory mission to find ways of mending relations between Harare and Washington

Woman wants maintenance from her husband