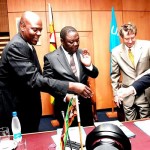 ZIMBABWE – MDC-T founding members in Bulawayo – also known as MDC Veterans Activists’ Association (MDCVAA) – have vowed to boycott all party provincial meetings as they are pushing for the ouster of substantive provincial chairman Gift Banda.

Yesterday, a group of veterans said they will destabilise all rallies addressed by party leader Morgan Tsvangirai.

“As founder members, we are still unsettled with the imposition of Banda as chairman. We are boycotting all provincial meetings called by Banda as a way of showing our displeasure.

“We will also take a step further and lobby for boycotts of all Tsvangirai rallies in the city.

“We are ready to pull out of MDC-T and join any party that follows its laid-down principles,” the veterans said.

The MDC-T leadership in Matabeleland wants the association disbanded accusing it of fomenting divisions and seeking to hijack the opposition party’s programmes.

The MDCVAA was formed in 2008 to cater for victims of political violence and later changed its name to Veterans Activists’ Association. Of late, the organisation has been accused of pushing its members to occupy key posts within the MDC-T structures.