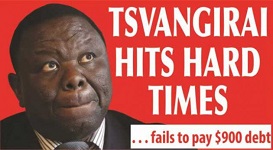 ZIMBABWE – MDC-T leader Mr Morgan Tsvangirai is failing to settle a $900 debt he owes a top Harare law firm and risks having his property auctioned to settle it.

The opposition leader has fallen on hard times after his stint in the inclusive Government ended in 2013, following victory by Zanu-PF in the harmonised elections.

Mr Tsvangirai and many other politicians within his party have no other source of income away from politics.

The Herald is reliably informed that Mr Tsvangirai was served with summons on Thursday at the opposition party’s Harvest House headquarters in central Harare.

He was in the middle of a meeting when he was served with the summons.

He has failed to settle the debt despite demand, leaving the law firm with no option.

It is not yet clear which case Atherstone and Cook Legal Practitioners represented Mr Tsvangirai, but he filed a number of cases to do with elections during the period.

The summons was filed at magistrates’ court under case number 37401/15.

Reads the summons: “You (Morgan Tsvangirai) are required that you do within seven (7) days after service of this summons upon you, enter or cause to enter with me, and also the plaintiff or its legal practitioners at the address specified herein an appearance (i.e file a Notice of Intention to Defend) to answer the claims of Plaintiff herein for payment of US$906.25 together with interest herein specified and costs, particulars hereof are endorsed hereon, and which, despite demand, remains unpaid.”

“Take note that: in default of your doing so you will be held to have admitted the said claim, and the Plaintiff may proceed therein and judgment may be given against you in your absence, but that, on payment of the said claim and costs to me within the said time, judgment will not be given against you, and that if, before the expiration of the said time you so pay or lodge with me and the Plaintiff a consent to judgment you will save judgment charges.”

If Mr Tsvangirai fails to contest the matter, a default judgment would be handed down against him.

“If you allege any exception, defence or counter-claim you must within seven days after appearance, deliver to me and to the said Plaintiff a statement in writing of the nature and grounds thereof,” further reads the summons.

The particulars of the claims show that Mr Tsvangirai is failing to pay for legal services rendered by the law firm.

“Whereof, Plaintiff claims: payment in the sum of US$906. 25, being an amount due and payable to the Plaintiff by the Defendant, in respect of the reasonable charges for services rendered to the Defendant by the Plaintiff including VAT in December 2013, which amount, despite promises to pay by Defendant and despite demand, the Defendant fails to pay.”

ZIMBABWE - MDC-T leader Mr Morgan Tsvangirai is failing to settle a $900 debt he owes a top Harare law firm and risks having his property auctioned to settle it. The opposition leader has fallen on hard times after his stint in the inclusive Government end...
Share via
x
More Information
x