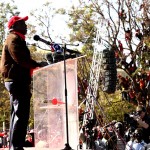 ZIMBABWE – MDC-T leader, Morgan Tsvangirai, is launching a nationwide meet-the-people campaign which the party will be aimed at reminding Zimbabweans that the darkest hour is just before dawn and mobilising support for electoral reforms.

The MDC realises that the Zanu PF regime has totally failed to resuscitate the comatose economy and as the government-in-waiting, we have found it necessary to reach out to the toiling masses of Zimbabwe in order to give them hope as well as reassuring them that the darkest hour is just before dawn, Gutu told NewZimbabwe.com Wednesday.

President Tsvangirai will be explaining the party’s position regarding the deteriorating economic situation in the country as well as explaining why its party has adopted the without reforms, no elections resolution.

The MDC-T blamed its defeat by President Mugabe and his Zanu PF party in 2013 to vote rigging and vowed not to contest any new elections without electoral reforms.

Among other things, the MDC-T is demanding provision of the voters roll to all contesting parties three months before election day and equal access to the state-controlled Zimbabwe Broadcasting Corporation radios and television stations in the campaign period.

The party also wants the Zimbabwe Electoral Commission (ZEC) to take over the registration of voters from registrar general, Tobaiwa Mudede, after the removal of so-called ghost voters from the register.

He Tsvangirai) will also explain the various measures that the party is taking to ensure that the Zanu PF regime gives in to our demand for electoral reforms before the holding of the next harmonised elections, said Gutu.

On Saturday, the former prime minister will address a rally at Dombwe Business Centre, in Chegutu East Constituency and conclude the tour of the province with a rally at Cassa Ground in Zvimba East constituency.

Tsvangirai’s spokesman Luke Tomborinyoka said the MDC-T leader’s Tamborinyoka engagement with Zimbabweans comes at a time the political and economic situation in the country continues to deteriorate.

Zimbabweans can barely survive, with the party in government more worried about succession battles at the expense of finding a solution to the worsening crisis, said Tamborinyoka.

In Mashonaland West, the President will talk about the crisis as well as the MDC’s proposed solutions to the national predicament, including the Zanu PF’s failure to come up with a sustainable solution to power shortages characterized by 20-hour blackouts every day.

Kariba Dam, the major source of power in the country, is in Mashonaland West province.

Never one to miss an opportunity to interact with the ordinary people, President Tsvangirai will engage Zimbabweans across the country and listen to their concerns about what is happening in the country.

ZIMBABWE - MDC-T leader, Morgan Tsvangirai, is launching a nationwide meet-the-people campaign which the party will be aimed at reminding Zimbabweans that the darkest hour is just before dawn and mobilising support for electoral reforms. Party spokesperson...
Share via
x
More Information
x