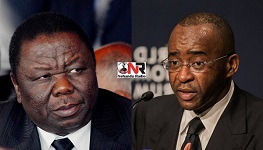 ZIMBABWE – Opposition leader Morgan Tsvangirai is the best person to lead Zimbabwe according to an online poll run on the Nehanda Radio website.

Tsvangirai secured 36,9% of the votes while telecommunications billionaire and Econet Wireless founder Strive Masiyiwa came in close second with 27,9%.

For someone who is not a politician, the high number of votes for Masiyiwa show a country ready for a new generation of leaders with fresh ideas on turning around Zimbabwe.

A total of 3,820 readers took part in the poll which also saw former Vice President Joice Mujuru, who was expelled from Zanu PF, coming in third with 10.8% of the votes.

Former Finance Minister Simba Makoni who quit Zanu PF to form his own party, Mavambo Kusile Dawn, came fourth with 7,6% of the votes.

President Robert Mugabe, who has been in power for 35 uninterrupted years, came a distant fifth with 6,6%, a clear indication many now feel at 91 years of age, his best years are behind him and retirement is the best option for him.

On several occasions now Mugabe has slept through summits, fell down at the Harare International Airport, before another stumble in India a few weeks ago. The incidents have only served to reinforce his ailing health.

Mugabe’s deputy and the front-runner to succeed him Emmerson Mnangagwa came in 6th with 5,3%. With accusations Mnangagwa, as State Security Minister, played a key role in the Gukurahundi Massacres in the Midlands and Matabeleland provinces it appears he has his work cut out to win over voters.

Former MDC Secretary General Tendai Biti, a Former Finance Minister in the coalition government, was 7th with 2,6% of the vote. Biti now leads the opposition People’s Democratic Party (PDP), a breakaway from the MDC-T.

The leader of the smaller faction of the Movement for Democratic Change (MDC) Welshman Ncube came last with 2,4% of the vote. Since a poor showing in the controversial 2013 elections won by Mugabe, Ncube’s party has been in free-fall with dozens of senior lieutenants resigning or being fired by the party.

With a climate of fear prevalent in Zimbabwe many people are not willing to respond to questions asked by researchers to reveal their political preferences. Online polls however allow people the secrecy and safety to make their choices freely without intimidation.

ZIMBABWE - Opposition leader Morgan Tsvangirai is the best person to lead Zimbabwe according to an online poll run on the Nehanda Radio website. Tsvangirai secured 36,9% of the votes while telecommunications billionaire and Econet Wireless founder Strive M...
Share via
x
More Information
x