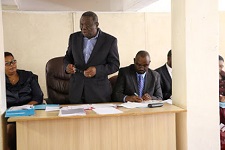 ZIMBABWE – MDC-T leader Morgan Tsvangirai yesterday moved to appease some of his top officials, who were left in the cold after the party’s congress last year.


Observers said the move was meant to ease tensions and avoid a potential split as many of his officials were still grumbling about the October congress, which created some frictions still rocking the party MDC-T spokesperson, Obert Gutu confirmed that Tsvangirai proposed that the five be co-opted into the national executive to demonstrate there “were no losers in the party”.

“In the MDC-T, everyone is a winner, there is no loser, the party’s internal democracy doesn’t mean there should be enemies. That spirit of magnanimity should be shown. The president proposed and council resolved and agreed that five new national executive members be appointed,” he said.

“This shows no one is a loser in MDC-T as we build the party. All of them automatically qualify to be in the national council,” Gutu
continued.

Gutu said the national council also agreed that party leaders lead from the front in demonstrations against the poor state of the economy.

ZIMBABWE - MDC-T leader Morgan Tsvangirai yesterday moved to appease some of his top officials, who were left in the cold after the party’s congress last year. Tsvangirai yesterday convened his party’s national council meeting, where he co-opted int...
Share via
x
More Information
x