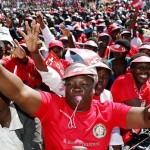 In an exclusive interview with Voice of America, Tsvangirai bemoaned the worsening economic crisis and tied it to President Robert Mugabe, the only leader Zimbabwe has known since 1980.

Tsvangirai said, “President Mugabe has presided over this economic decline for the last 35 years. I do not think his age is any benefit in bringing confidence in the economy.”

The 91 year-old Mr. Mugabe is the world’s oldest president.

Tsvangirai’s remarks come as the Confederation of Zimbabwe Industries (CZI) reports that capacity utilization in the manufacturing sector has declined to 34.4% this year compared to 36.5% last year.

According to CZI chief economist Dephine Mazambani-Mutaferi, the constraining factors have largely remained the same as compared to last year. “Capacity utilization remains a key factor in measuring performance of the manufacturing sector.

The country’s economy, long mired in recession, is under-performing in almost every sector since President  Mugabe won a disputed election in 2013.

Tsvangirai says as a result of this poor national economic outlook the nation needs new blood.

He said Mr. Mugabe and the ruling Zanu-PF party have pressed the self-destruction button as they are focusing on factionalism and not addressing the socio-economic and political crisis engulfing the nation. “It’s self-destruction, it is unprecedented, we have never witnessed it, it’s almost like the center is not holding.”

Zanu-PF has admitted that the current internecine fights within the party posed the greatest threat to its survival and is a national security danger.

The party is deeply divided along factional groups, one allegedly led by Vice President Emmerson Mnangagwa and another aligned to First Lady Grace Mugabe and the Young Turks dubbed generation 40 or G40, among others.

According to a Central Committee Report tabled before the Zanu-PF 6th National People’s Congress last year, factionalism was inflicting “untold damage and injury on members and should be vigorously fought and annihilated…This could be the party’s undoing of monumental proportions.”

Tsvangirai said the MDC-T is open to working with other opposition parties to form a coalition though there are also challenges.

“I have often said the position of the MDC is that engaging in talks is not the same as negotiations, obviously as a political party we talk across the political divide. People are searching for the way forward.

“But unfortunately the Mujuru camp (former Vice President Joice Mujuru expelled from the ruling Zanu-PF party) as it is known as People First has not concretized what they want to do. So, until such a time they have built an institution I think the MDC will be reluctant to engage with individuals rather than an institution. So, I am sure they are working on that.”

Tsvangirai though said all opposition parties must converge and push for reforms.

After she was fired from government last December, Mrs. Mujuru apologised to Zimbabweans for having been part of Mr. Mugabe’s “ruinous” leadership.

The former vice president has remained silent though issuing statements pledging to continue working for Zimbabweans and correct her mistakes, even going to the extent of publishing an alternative blueprint titled Blueprint to Unlock Investment and Leverage for Development (BUILD).

However, Mujuru has to date not spelt out her future role in politics despite indications by her-profile sympathisers that she would lead a formation known as People First to challenge President Mugabe in the 2018 elections.

Morgan Tsvangirai, who was born in 1952 in Masvingo province’s Gutu district, worked in a mine before becoming one of the most important political figures in Zimbabwe.

He became the secretary general of the Zimbabwe Congress of Trade Unions in 1988 and organized anti-government strikes.

In 1999 he resigned from the NCA to establish the Movement for Democratic Change with the backing of labor, intellectuals and students. He has been the president of the party since its formation.

From 2009 to 2013 Tsvangirai served as prime minister in a fragile power-sharing government, with Mr. Mugabe remaining Zimbabwe’s president.

That unity government ended with the elections in July 2013.

Mr. Mugabe’s party won a huge majority in the vote, which the former prime minister dismissed as fraudulent.

ZIMBABWE - The founding president of Zimbabwe’s opposition Movement for Democratic Change, Morgan Tsvangirai, says the country’s economy is now a train wreck owing to Zanu-PF’s policy inconsistencies and infighting. In an exclusive interview with Voi...
Share via
x
More Information