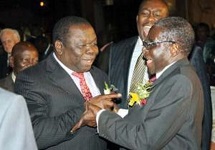 ZIMBABWE – HARARE – Opposition leader and former prime minister in the government of national unity, Morgan Tsvangirai, has warned President Robert Mugabe and his warring post-congress Zanu PF about their “continued repression of the people”.

Speaking in an interview yesterday — after authorities banned a church-organised meeting in Harare that was to be attended by civil society organisations, students bodies and political parties — Tsvangirai said the continued oppression of the people would result in “an explosion that not even the country’s partisan police” would be able to contain.

He also once again expressed his readiness to work with former Vice President Joice Mujuru, stressing that the common enemy that all Zimbabweans had to confront at the moment was the post-congress Zanu PF — whose end he said was nigh.

After the court duly granted the church permission to go ahead with the convention, the organisers were frantically trying to get it going late yesterday, to discuss the political, social and economic situation prevailing in the country.

“It was our way of ending the year on a positive note and Zanu PF in the spirit of preventing the people from coming together through the police disrupted the meeting.

“But it is like a spring, the more you put pressure on the spring the more it rebounds. Indeed, the more problems people face economically and socially, and you are not finding an avenue to deal with it in a peaceful way, the more likely the chances of an explosion,” Tsvangirai warned.

He added that with the opposition parties now coming together after they signed the National Electoral Reforms Agenda (Nera) document, the end for Zanu PF was nigh, as Zimbabweans had at last realised that they needed to work together to end Mugabe’s “disastrous 35 years” in power.

“On our part, we have always advocated the spirit of the big tent where anyone who subscribes to the question of national convergence is welcome. In the case of the People First, they must of course first become a political party and we will definitely work with them afterwards, as is the case with other political parties.

“One of the problems with a few people is that they look at personalities, whereas we are talking of institutional relationships. Indeed, we want long-lasting relations, these must be institutional and not personal.

“For me, People First are victims of political shenanigans. If there is an issue it is a minor one regarding the fact that they took long to realise that Zanu PF is a party that devours its own children,” Tsvangirai said.

He criticised the fact that the authorities had unleashed armed police to block hundreds of people from different churches and socio-political groups who were going to meet for the Zimbabwe National Agreement Platform event at the City Sports Centre.

Drawing comparisons between “the attack on democracy today with the refreshing events in South Africa earlier this week” where the people of that country had demonstrated freely against President Jacob Zuma, Tsvangirai said this showed that Zimbabwe had “a long way to go on the democratic path”.

“It’s an irony that in South Africa people were marching saying Zuma must fall and there was absolutely no brutality. People expressed themselves freely, which is what must happen here.

“But because of the paranoia of this regime, people are not allowed to express themselves,” he said.

More than 10 opposition movements, including Mujuru’s People First, have joined hands to sign Nera, in a bid to pressure Mugabe to implement much-needed electoral reforms ahead of the eagerly-anticipated 2018 national elections.

Asked about the momentary stand-off that had taken place between police and people who wanted to attend yesterday’s convention, MDC secretary-general Douglas Mwonzora said the Zanu PF government had “exhibited its dictatorial tendencies” to all.

“This is all designed to frustrate our people because the people were going to come in numbers. And when authorities act so unfairly and unreasonably, we have a duty to disobey them and therefore we are going to proceed symbolically as a show of defiance to this blatant dictatorship.

“All opposition political parties now share the same sentiments and they all think that we must resist this heavy-handedness by the police,” Mwonzora said.

“The order to proceed with the meeting was granted by Justice Joseph Musakwa. So as I speak people, are starting to get inside the venue.

“We had advised the police who are here that the court is dealing with the matter and that they cannot disperse people. They referred us to the commanding officer and we have also advised the commissioner of police.

“We are going to have the meeting well into the night, and we will definitely have it today,” Mwonzora said late yesterday.

ZIMBABWE - HARARE - Opposition leader and former prime minister in the government of national unity, Morgan Tsvangirai, has warned President Robert Mugabe and his warring post-congress Zanu PF about their “continued repression of the people”. Speaking ...
Share via
x
More Information