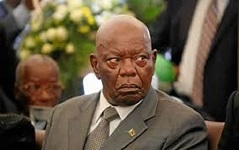 ZIMBABWE – In another ringing endorsement of opposition leader Morgan Tsvangirai, former Presidential Affairs minister Didymus Mutasa says the MDC president was always right on his “principled stand” against a “rotten” Zanu PF led by “self-seeking looters” who now belonged to the “dustbin of history”.

Speaking to the Daily News at the weekend, the former close confidante to President Robert Mugabe also said he regretted the fact that he distrusted, and was even spiteful of Tsvangirai when they worked together during the era of the Government of National Unity (GNU) when the latter was prime minster.

“During the GNU, I was prejudiced against him, I thought he was a puppet and at that time I didn’t see anything other than that. But
looking at things now dispassionately, he was always right on Zanu PF.

“I remember the things he and the MDC used to say, and their views when they said Zanu PF yaora (Zanu PF is rotten). At the time I said these people are mad, but looking at it now, how else can you describe Zanu PF.

“The president has to act very quickly and think very quickly to resolve the problems because Zanu PF smells and is now a big stink,”
Mutasa said.

Although Tsvangirai “shared” power with Mugabe in the tenuous coalition government from 2009 to 2013, in the capacity of prime minister, many senior officials from the ruling party — including Mutasa — openly defied him as he had no binding executive powers in reality.

But times have changed, with Tsvangirai and Mutasa — a key player in the People First movement that is associated with former Vice President Joice Mujuru, and which plans to forge alliances with other opposition parties ahead of the much-awaited 2018 elections — are now singing from the same hymn book.

Addressing his own supporters at a recent rally in Honde Valley, Tsvangirai said it was heart warming and remarkable that people like Mutasa now saw Mugabe and Zanu PF “for what they really are”.

“But if we now see the same way that our country needs change in terms of leadership, then we are moving in the same direction. We should put our efforts together to see that Mugabe and Zanu PF go,” Tsvangirai said.

Kent University law lecturer and former close aide to Tsvangirai, Alex Magaisa, said it was critical in his view for the leaders of the MDC and the People First movement “to park their egos and engage in coalition talks”.

The one major hurdle that Magaisa foresaw for the conceived grand coalition would be the fact that there was no love lost between
Tsvangirai and People’s Democratic Party leader Tendai Biti, who is said to be close to some of the top players within the People First movement.

Still, Magaisa said, it was time for the fragmented opposition in the country to set aside their personal differences and work together.

And Mutasa told the Daily News at the weekend that he was aware that there were attempts to scuttle the mooted coalition talks by “some selfish individuals in both the post-congress Zanu PF and the MDC”.

“The question that one has to ask is are these envisaged coalitions for the leaders or the people, or is it just the same selfishness that we have seen over the years?

“I would want a coalition that includes all the parties and the leaders who have been tested and who are strong, who want their nation to go forward,” he said.

Mutasa said the envisaged coalition, that has since rattled Mugabe and the post-congress Zanu PF, should not be about positions but rather about finding solutions to “extricate crisis-weary Zimbabweans from the jaws of poverty that they have been placed in by Zanu PF’s rotten policies”.

“We are in a very sad state and it is really worse for people in the rural areas who have no dollar to buy bread. They are placed in the worst economic conditions imaginable.

“There is nothing these people can expect from this government but to wait for the rain, and even when the rains come, few have the seed. I would like the government to announce something that gives people hope, but they are just fighting among themselves. The situation is untenable,” Mutasa said.

Resultantly and obviously so, Mutasa said, Zimbabwe — formerly viewed as the bread basket of southern African — was now a basket case and a net importer of food where at least 1,5 million people were in dire need of food aid, ironically from the West.