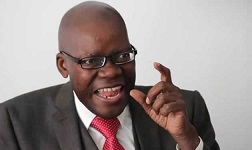 ZIMBABWE –  People’s Democratic Party PDP has warned that 2016 is going to be ungovernable for President Robert Mugabe’s Zanu PF government because of riots which will be caused by disgruntled citizens.

Tuesday saw disturbances in Chitungwiza which were sparked by clashes between commuter transport operators, the police and Zanu PF youths. Clashes were also witnessed in Harare.

PDP spokesperson Jacob Mafume warned that riots are going to characterise 2016 if the authorities do not address real pressing issues.

Real pressing issues, according to Mafume, are the failing economy and employment creation.

2016 is going to be worse than 2015 in terms of the administration of the countrys politics and this (clashes) is the beginning of lawlessness which will lead to the killing of each other, Mafume told NewZimbabwe.com in Harare Wednesday.

Commuter transport operators have a right to protest, council and government are charging exorbitant fees for anyone to do business and we need to stop this rent seeking behaviour.

Reports claimed that Zanu PF youths assigned to man ranks in Chitungwiza clashed with touts who were protesting police harassment.

Mafume said the use of Zanu PF youths in council business should be condemned.

What is of concern to us is the use of Zanu PF militia to deal with protesting citizens, said Mafume.

The violence which escalated in the morning of Tuesday saw residents besieging some parts of the town, resisting â€œrandom attacks by police over the chaos.

We are also worried by the heavy handedness of the police who brutalised protesters.

People have a right to protest and this is clearly articulated and guaranteed in the constitution, said Mafume.

ZIMBABWE -  People's Democratic Party PDP has warned that 2016 is going to be ungovernable for President Robert Mugabe's Zanu PF government because of riots which will be caused by disgruntled citizens. Tuesday saw disturbances in Chitungwiza which were...
Share via
x
More Information