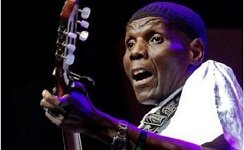 ZIMBABWE – Superstar Oliver “Tuku” Mtukudzi will today cement his romance with kids when he performs at the Harare International School Theatre.

He will be sharing the stage with two minors Michelle Kadzirange and Matt Greenwood (17) with the thrust of the show aimed at raising funds for the vulnerable children at Harare Children’s Home.

In an interview, Tuku’s manager Sam Mataure confirmed the developments.

“We have started performing in schools for pupils and we hope to carry on with it to other schools throughout the year,” said Mataure.

“It is good to reach-out to children parents and it is an exciting experience. Before the end of the year, we hope to visit more schools to entertain the school children.”

Show organiser Bernie Bismack said it was with great honour to present such a memorable show.

“It is with great honour and pleasure we present live in concert on March 4 and the show starts at 7pm.

“The opening and supporting acts Michelle Kadzirange and Matt Greenwood will take to the stage at around 7.15pm and pave way for Mtukudzi,” he said.

Bismack called upon people to come out in numbers and support them in their endeavour to save souls.

“We encourage you to bring the whole family and Harare International School is an alcohol -free campus. This event is a great learning experience of our host country’s musical legend and hero. Dr Mutukudzi is a supporter of the arts and has given much back to the Zimbabwean community by building an Arts Centre in Norton and supports local talent,” he said.

Michelle is a Grade 11 Student at HIS enrolled in the IB program and she hopes to do her continued learning in Canada, studying International Relations.

Michelle is gifted with a wonderful voice and plays Piano and the Mbira.

While Matt, 17, is a gifted Zimbabwe Guitarist who has been to the Steve Vie guitar camp in USA.

He has been accepted into Berkley in Boston to major in Music.

ZIMBABWE - Superstar Oliver “Tuku” Mtukudzi will today cement his romance with kids when he performs at the Harare International School Theatre. He will be sharing the stage with two minors Michelle Kadzirange and Matt Greenwood (17) with the thrust of...
Share via
x
More Information