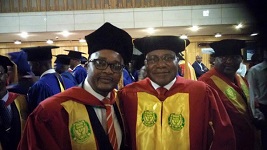 Harare Provincial Affairs Minister Miriam Chikukwa graduated with a Masters in Business Administration. Dr Mushowe, who has held several briefs in Government since Independence, graduated with a Doctor of Philosophy in Peace and Conflict Management degree, adding another accolade to his other academic achievements.

His PhD research topic was “The impact of the responsibility to protect (R2P) doctrine on African peace and security architecture: A hermeneutical reading of the Libyan Conflict”.
Dr Mushowe is studying towards another PhD in Ethics, Leadership and Governance with the University of KwaZulu-Natal. He holds Masters degrees in Peace, Leadership and Governance (Africa University), Public Administration and International Relations (both University of Zimbabwe), and Business Administration (Leicester University).

“I wish to pay my heartfelt gratitude to His Excellency, President Mugabe, for the inspiration, guidance and encouragement during my study,” said the minister. “I received invaluable insights into the Libyan conflict and the AU’s position on the responsibility to protect doctrine from President Mugabe.

“My humble thanks also go to Professors Machakanja and Menelik of Africa University, D Koetze of Unisa and Neil Thompson of Aldersgate University (Singapore) and Mahiya for the encouragement.

“My research assistant, Mr K Mabvundwi, thank you. To my wife, Penelope, my pillar of strength and for her support during my sleepless nights of study. A big thank you. Above all, Glory be given to God.”

Dr Mzembi graduated with a PhD in Business Administration after researching “An exploratory study of conservation management in Zimbabwe: A governance perspective”.
He said his study interrogated involvement of communities in conservation, which has been sidelined over the years despite Government having introduced the Campfire model. Minister Chikukwa said she was inspired to study by President Mugabe and colleagues in the ruling Zanu-PF and Government.

Mapfumo cries out to US over Mugabe

ZIMBABWE - Information, Media and Broadcasting Services Minister Christopher Mushowe and his Tourism and Hospitality counterpart, Engineer Walter Mzembi, graduated with PhDs from Aldersgate University College at a ceremony held at the University of South A...
Share via
x
More Information
x