U.S. Ambassador to Zimbabwe: Who Is Harry K. Thomas Jr.? 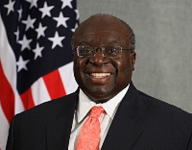 ZIMBABWE – Harry K. Thomas Jr. was nominated on July 23, 2015, by President Barack Obama to be the next ambassador to Zimbabwe. His confirmation on Oct. 22, 2015, made this the third such posting for the career Foreign Service officer.

Born June 3, 1956, to Harry and Hildonia Thomas in New York City’s Harlem neighborhood, Thomas grew up in Queens and attended Brooklyn Tech high school. His father ran small businesses and his mother was a social worker. He went on to College of the Holy Cross, where he received his bachelor’s degree in 1978. He then earned an MS at Columbia University.

He joined the Foreign Service in 1984 after working three years as an urban planner in the Bronx. His early career postings included New Delhi, India; Harare, Zimbabwe; Kaduna, Nigeria; and Lima, Peru. His duties included senior watch officer, deputy director, director of the State Department Operations Center, special assistant to the Under Secretary for Political Affairs, and staff assistant to the Assistant Secretary for African Affairs.

From 2001 to 2002 Thomas served in the White House as the Director for South Asia at the National Security Council, occasionally briefing President George W. Bush on the conflict between India and Pakistan. He then was U.S. ambassador to Bangladesh from 2003 to 2005, followed by a position as special assistant to the Secretary of State and executive secretary of the State Department. In that role, he helped coordinate the evacuation of 15,000 Americans from Lebanon in 2006.

Thomas then served as director general of the Foreign Service and director of human resources. While working as director general, Thomas had to handle an angry town hall meeting of Foreign Service officers who objected to the State Department’s plans during the Bush administration for Iraq, including ordering people to serve at diplomatic posts. Thomas tried to quell the anger by explaining the department was not getting enough volunteers to go to the war-torn country.

When one longtime Foreign Service officer called an assignment to Iraq “a potential death sentence,” producing considerable applause, Thomas responded: “OK, thanks for your comment,” and ended the meeting.

In 2010, Thomas was tapped as U.S. ambassador to the Philippines. While in Manila, he created a controversy when he sent a text message to Philippine Foreign Secretary Albert del Rosario saying that 40% of male tourists to the Philippines were there for the sex trade. Thomas later apologized for the text.

Thomas returned to the United States in 2013 to serve as diplomat in residence for the Southwest, teaching at Arizona State University.

Thomas speaks Spanish, Hindi, Bangla and Tagalog. He was previously married to noted jazz singer Ericka Ovette, whom he divorced while in Manila. In 2014, Thomas married Mithi Aquino—no relation to the Philippine president—a cruise line official and divorced mother of two whom he met while serving in the Philippines. Thomas has one daughter with Ovette.

U.S. Ambassador to Zimbabwe: Who Is Harry K. Thomas Jr.?

ZIMBABWE - Harry K. Thomas Jr. was nominated on July 23, 2015, by President Barack Obama to be the next ambassador to Zimbabwe. His confirmation on Oct. 22, 2015, made this the third such posting for the career Foreign Service officer. Born June 3, 1956, t...
Share via
x
More Information