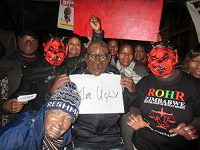 ZIMBABWE – Mr Chinamasa came up with no serious plans to address the country’s economic malaise. The Vigil thinks this is because Mugabe has no answers except to get on a plane and go to Paris for another grandstanding conference.

So the situation in Zimbabwe will surely get worse. When we became independent we were second only to South Africa in the region in terms of economic development. Now Zimbabwe’s budget is smaller than those of all our neighbours, including previously pitied Botswana.

What makes the situation so serious for Zimbabwe is that virtually all the money the government gets goes on paying the government itself leaving nothing for the country. That things can be done differently is shown by Tanzania’s new president John Magufuli. His first move was to cancel independence day celebrations to spend the money on a cleanup campaign

The Vigil is sad that Zimbabwe is not under the leadership of someone with the vision of President Magufuli whose first thought was to scythe the privileged in the interests of the people as a whole.

Indeed, so self-obsessed is Mugabe that he went on from his Paris shopping trip to take part in the Vigil’s Mr Ugly competition (now an international event). – Zim’s Mr Ugly must also be ‘creative and stylish’ – organiser.

As expected, the event was fiercely competed by various devils but after satisfactory arrangements were put in place with the Vigil’s bankers, Robert Mugabe was unanimously declared the winner and awarded the Nikuv floating trophy.

Thanks to those who came early to help set up: Eunice Mucherechedzo, Humphrey Dube, Sharon Moyo, Jennifer Maritsa, Farai Sharmaine Gumbanjera and Fungay Mabhunu. Special thanks to Humphrey for climbing up and down the ladder to put up the banners and tarpaulin and to Eunice and Sharon for taking care of the front table. Thanks to those who stayed till the end to help pack up: Alice Shimika, Audrey Chihoho, Catherine Musa, Chipo Parirenyatwa, Eunice Mucherechedzo, Fungayi Mabhunu, Humphrey Dube, Ishmael Makina, Jennifer Maritsa, Jennipher Sabe, Kidi Gotsi, Sharon Moyo, Tawanda Chikwanha, Veli Mamba and Zondiwe Gumede.

Chigwedere in court for witchcraft

Eskom ‘in secretive deal’ to provide power to Zimbabwe

ZIMBABWE - Mr Chinamasa came up with no serious plans to address the country’s economic malaise. The Vigil thinks this is because Mugabe has no answers except to get on a plane and go to Paris for another grandstanding conference. So the situation in Zim...
Share via
x
More Information
x