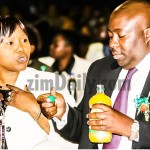 Dholakia, who was accompanied by British Ambassador to Zimbabwe Catriona Laing, also discussed measures to mitigate the impact of climate change on Zimbabwe in the context of the forthcoming 21st Conference of the Parties (COP) in Paris, France, in December.

“They also discussed the positive role UK expertise in designing public/private partnerships may play in assisting Zimbabwe leverage investment in vital infrastructure and the UK’s Chevening Scholarship programme,” a statement from the British Embassy said.

Dholakia said she had a productive meeting with Muchinguri.

“I urge local conservation organisations to apply for support before the application window closes on October 12. We look forward to continuing our support for the people of Zimbabwe through our aid programmes, technical assistance and broader co-operation.”

Laing said their meeting demonstrated her country’s willingness to work with Zimbabwe to tackle the global problem of illegal wildlife trade.

“Today’s (yesterday) meeting is a very practical demonstration of the UK’s willingness to work together with Zimbabwe to tackle the global problem of the Illegal Wildlife Trade, and on broader conservation issues in order to promote sustainable development for the Zimbabwean people. Addressing these issues together will help to strengthen the ties between our countries,” she said.

Zimbabwe Announces Plans For A $300 Million ‘Disneyland In Africa’