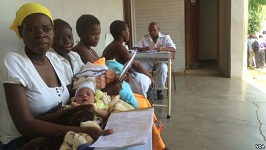 ZIMBABWE – When expectant mother Elizabeth Manyenga felt her first labor pains and knew that the birth of her child was near, she immediately began walking from her home in Zimbabwe to the hospital — 10 kilometers away.

“I come from Pattison Farm, near Muda,” Manyenga, 19, said at Mahusekwa Hospital in Marondera district, less than 100 kilometers southeast of Harare. “I do not have any idea of how many kilometers it is from here.”

She set out on her pre-birth trek because there is a shortage of ambulances in Zimbabwe. “I arrived here the day before yesterday. My delivery [of a baby girl] was smooth, very simple, and the hospital is taking care of us,” she said.

Manyenga was lucky. Zimbabwe has some of the highest rates of maternal and infant mortality in Africa. Kate Gilmore, deputy executive director of the U.N. Population Fund, launched a five-year, $680 million effort in Zimbabwe to address the problem. She showcased the program recently at Mahusekwa Hospital, where Manyenga was one of six mothers with newborns.

Experts say shortages of skilled labor and the absence of state-of-the-art equipment at hospitals contribute to the high death rates in Zimbabwe. In an interview, Gilmore acknowledged that the country needs better health facilities, “but most important, it needs great health workers. The more we can do on the health side of things, the more we can see lives saved. But we then need to give women and men education and information about birth spacing.”

Ideally, she added, it would be best to have young people staying in school, rather than marrying too early. “So those are both social and health programs that can save lives.”

Tawanda Borerwe, chief medical official at Mahusekwa Hospital, pointed to the critical shortage of emergency vehicles as a problem for expectant mothers. In some districts in Zimbabwe, ambulances can take three hours to respond to a call, if there is a response at all. That results in mothers delivering babies at home, where some die of hemorrhage. The government says that’s the major contributor to deaths of women during delivery.

To address the transportation problem, some hospitals have introduced waiting homes for expecting mothers. The women go to these hospitals in the last month of their pregnancies so as to avoid eleventh-hour trips.

Zim paying the price of misrule

ZIMBABWE - When expectant mother Elizabeth Manyenga felt her first labor pains and knew that the birth of her child was near, she immediately began walking from her home in Zimbabwe to the hospital — 10 kilometers away. 'I come from Pattison Farm, near ...
Share via
x
More Information
x