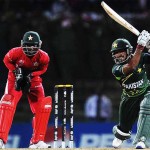 ZIMBABWE – It scarcely seemed possible after their crushing defeat in the first ODI, but Zimbabwe will go into the third match focused on what could be their first one-day series win over a top 10 side other than Bangladesh for more than 14 years. To do that, though, they’ll have to fire on all cylinders against a Pakistan side who will feel that the momentum was on their side before the inclement weather tipped Saturday’s game in Zimbabwe’s favour.

Zimbabwe remain perennial underdogs and though they wobbled noticeably in the face of Shoaib Malik’s death-defying brilliance, they showed during the second ODI what they are capable of as a team when it all clicks. Zimbabwe didn’t lose any wickets to spin in the second match, after losing all 10 to the slow men in the first. Top order runs, a lower order blast, early wickets, and inspired fielding were all on show. But on the flip side of that, there was also the omnishambles of the late afternoon where it all threatened to fall apart, and inconsistency of performance is still a problem for the hosts.

Pakistan, on the other hand, have been consistent in both their successes and failures during their trip to Southern Africa. In every match their top order has failed, their lower middle has rallied, and their bowlers have kept them in the game. Their defeat on Saturday means Pakistan have slipped to No. 9 in the ODI rankings – if they had been No. 9 three days ago, they would not have qualified for the Champions Trophy. Though these two teams are now slightly closer in the ICC’s one-day rankings, and despite Zimbabwe’s strong team performance to level the series, once again Pakistan start as favourites.

After spending months as a specialist batsman, circumstances dictated that Elton Chigumbura should return to his traditional allrounder role in the second match. He quickly shook off what rust may have coated his bowling arm and contributed roundly to Zimbabwe’s success with a wicket, a catch, a run-out and a half-century earlier in the day. He’ll want to lead from the front in the decider, and if his top order gives him a platform, his devastating batting could be the difference between ignominy and a historic series win.

Shoaib Malik has been the calm centre of a combustible Pakistan middle order on this tour, and every time he has arrived at the crease, his team has been in trouble. He top-scored in the opening T20, and though he failed in the second, he made an all-round contribution to the visitors’ win in the first ODI. He very nearly sealed the series on Saturday and, given the way that match ended, Malik will be out to prove a point on Monday.

Zimbabwe stuck with the same XI in the second ODI, but they face an enforced change in the series decider. Graeme Cremer’s ankle injury has all but ruled him out, and the most obvious replacement for him is legspinning allrounder Tino Mutumbodzi. Though he dropped a crucial catch, Mutumbodzi was generally an electric presence in the field and his run-out of Mohammad Hafeez was vital to Zimbabwe’s eventual success. While Hamilton Masakadza has looked out of sorts in this series, his place is probably still safe and the only other reserve batsman in the side is Malcolm Waller.

Pakistan’s changes for the second match didn’t quite work out – debutant Bilal Asif held his own with the ball without ever really threatening and was unconvincing with the bat, while Asad Shafiq was an anonymous presence. Given Imad Wasim’s current form with both bat and ball, Pakistan will want him back and the visitors may well revert to the XI that crushed Zimbabwe so effectively in the first match.

After a series of slow, low turners during this tour, the pitch used in the second ODI was more what one might term a good cricket wicket. With a little grass left on the track, Pakistan’s spinners weren’t quite as menacing but it still offered something to bowlers of all types and also made strokeplay a little easier. HSC head groundsman Fungai Shanganya will probably aim for something similar in the decider. Monday will definitely start off sunny and warm, and though there is no rain predicted, once the rainy season arrives in Zimbabwe one can never be quite sure when and where a thunderstorm will appear.

Shoaib Malik defends Pakistan’s top order, many of whom have been dismissed playing big shots in this series.

“It’s nice to see a good young player whose confidence is growing, and that was just his second ODI.”

Zimbabwe coach Dav Whatmore has been very pleased with Brian Chari’s development since his ODI debut.

ZIMBABWE - It scarcely seemed possible after their crushing defeat in the first ODI, but Zimbabwe will go into the third match focused on what could be their first one-day series win over a top 10 side other than Bangladesh for more than 14 years. To do th...
Share via
x
More Information