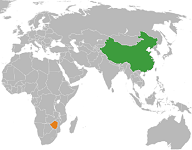 ZIMBABWE – Efforts are being made to improve the cultural exchange between China and Zimbabwe.

The University of Zimbabwe launched the first-ever Chinese-Shona dictionary on Friday, Nov. 20, together with five other books, as part of moves by the country’s oldest higher learning institution to advance intercultural exchange between the people of China and Zimbabwe, as reported by the Global Times.

The Confucius Institute (CI) collaborated with the university’s Department of Linguistics to produce the “Shona-Chinese-Chinese-Shona Dictionary.”

The dictionary is divided into two parts, the Shona-Chinese section and the Chinese-Shona section.

Mashiri said that the best way to strengthen bilateral relations was to have mutual cultural exchange.

“The tendency has been to emphasize us learning Chinese without paying attention to the Chinese themselves learning our local languages,” Mashiri said. “And so because of the amount of investment and amount of interaction that is taking place between us and the Chinese, it will be productive and wise for them to start learning local languages, and Shona, being the major languages in Zimbabwe, this dictionary will act as a vehicle for promoting that cultural exchange.”

Levi Nyadura, Vice Chancellor of the University of Zimbabwe, said that the dictionary will improve cultural interaction between the people of the two countries.

“We want to promote this important interaction between the two cultures,” Nyagura said, “and there is nothing better than focusing on the vehicle that carries the culture of a people, and this is the language.”

ZIMBABWE - Efforts are being made to improve the cultural exchange between China and Zimbabwe. The University of Zimbabwe launched the first-ever Chinese-Shona dictionary on Friday, Nov. 20, together with five other books, as part of moves by the country'...
Share via
x
More Information