Zimbabwe Hospital Doctors Association president, Dr. Fortune Nyamande says their members together with nurses from the Zimbabwe Nurses Association failed to get to their work stations because of several challenges including lack of bus fare.

In an effort to avert the strike, the government early this week requested hospitals to make contingent plans to ensure that all critical areas are adequately staffed and remain functional until 5 January this year when the doctors and nurses get their salaries.

Through this arrangement, the government promised to provide transport allowances of $2 per person which was rejected by the striking hospital staff.

Nyamande says between 60 and 70 percent of hospital staff failed to report for work, adding that their hands are open for any discussions with the government.

“We have actually even deployed a few of our comrades to go to work just to serve in the critical areas so that we don’t expect our people with emergencies to die.”

He told VOA Studio 7 that Harare Hospital maternity wing has almost become dysfunctional as most nurses have opted to stay away from work.

Health Minister Dr. David Parirenyatwa was not available for comment as he was not responding to calls on his mobile phone. 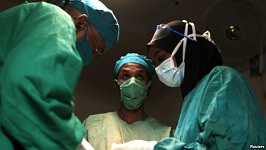