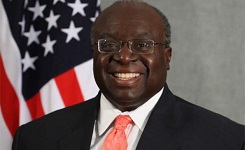 Ambassador Thomas, an African American diplomat who once served at the US Embassy in Harare, was sworn in on Tuesday in Washington DC in the presence of his family and close colleagues on Tuesday.

On his appointment Ambassador Thomas said: “I want to express my appreciation to president Barack Obama, secretary (John) Kerry and Ambassador Thomas-Greenfield for the confidence they have shown in appointing me as our ambassador to the Republic of Zimbabwe.

“I have tremendous admiration for Ambassador Bruce and Julie Wharton’s work in Zimbabwe and also for the superb team of Zimbabweans and Americans working jointly for the betterment of both nations.

“I look forward to returning to the beautiful land where our daughter Casey learnt to walk, talk and emerged with a Zimbabwean accent that befuddled our family and friends when we returned home.”

Thomas said he was excited to introduce his wife, Mithi to the wonders of Zimbabwe, which include Great Zimbabwe, the roar of Victoria Falls, the beauty of Hwange National Park and most importantly the kind and generous Zimbabwean people.

“We look forward to being respectful guests in Zimbabwe,” added Thomas.

In addition to his tenures as ambassador to Bangladesh and the Philippines, his earlier postings included service in the US embassies in India, Zimbabwe, Nigeria and Peru.

As of September, 2013, Thomas was serving as the state department’s diplomat-in-residence for the Southwest.

US appoints new ambassador to Zim

ZIMBABWE - United States president Barack Obama has appointed Harry Thomas Jnr as Washington’s new ambassador to Zimbabwe to succeed Bruce Wharton, who left the country in August. Ambassador Thomas, an African American diplomat who once served at the US ...
Share via
x
More Information
x