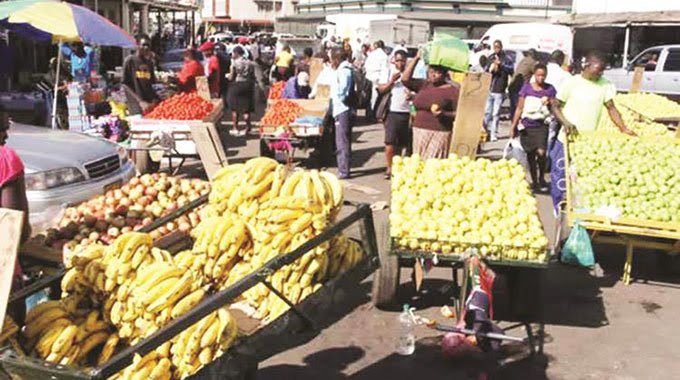 Vendors sell their fruit and vegetables

ZIMBABWE – The Vendors Initiative for Socio-Economic Transformation (VISET) has said the government should find ways to broaden the scope and include the informal sector into the essential services category so that many citizens who depend this sector can be allowed to work and provide for their families.

VISET Executive Director, Samuel Wadzai said the current situation was posing challenges to many in the informal sector, adding that this has led to others increasingly defying lockdown orders in an effort to sustain their livelihoods.

“It’s quite a difficult situation for us as the informal sector, what the lockdown means is that we can not go out and trade and work. So it means inability to put food on the table. It has affected the majority of our members, of course, a few have been allowed operate as you may be aware those that are dealing with fruit and vegetables some markets are still operating in Mbare, Lusaka and other markets through the country but very small number has been allowed to operate,” said Wadzai.

Wadzai also expressed disappointment that the government has not yet set up a cushioning fund for the informal sector as initially promised.

“As you may be aware when we had the initial lockdown, there were some indications from the government that they were going to put together a cushioning fund for the informal sector. And this has not been implemented up to to this day,” he added.

Local Government expert and human rights activist, Mfundo Mlilo said many of the challenges faced by the sector during the current pandemic were a result of the failure to recognise the informal sector as part of the economy of the country.

To illustrate his argument, Mlilo highlighted how Asian economies have been sustained by the small and medium businesses which were established through recognition of the informal sector.

“The informal sector is not an important sector of the economy, it is the economy in Zimbabwe. There are over 100 000 people who come to the Harare Central Business District every day to come and trade. And if you go to the communities, you see many other people.

“Asian economies, many of them have survived on the informal economy. 60% of their economies survive on small and medium enterprises while our own has remained informal trade. It has remained subsistence because we have not been able to recognise the sector as an important sector of the economy,” said Mlilo.

Wadzai also noted that he hoped the government will come up with ways to assist the informal sector especially post-Covid-19 given that it is one of the most affected by the current pandemic which has seen even borders closed thus hindering their ability to re-stock.

Mugabe warned to rein in Grace

ZIMBABWE - The Vendors Initiative for Socio-Economic Transformation (VISET) has said the government should find ways to broaden the scope and include the informal sector into the essential services category so that many citizens who depend this sector can ...
Share via
x
More Information
x