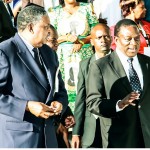 ZIMBABWE – Newly appointed Zimbabwe and Zanu-PF Vice President Phelekezela Mphoko, a long serving diplomat and freedom fighter, has said he is elated with his elevation and promised to deliver to people’s expectations.

“This is not a sleep on the job work,” said Mphoko, in an interview soon after his appointment by President Mugabe yesterday. “This is not a honeymoon. This is in actual fact a challenge. That is the most important thing.

“The challenges and problems that are there I will find them from the people. “People are going to tell us what the problems are, then together we will address them.” Mphoko (74) was the zipra commander in charge of logistics and supplies during the liberation struggle.

He was also part of the five-man zipa Command, a joint operation between Zanla and Zipra. Mphoko was one of the first seven commanders of the Military Planning Committee of Zapu formed in 1965, together with Ambrose Mutinhiri, Abraham Nkiwane, then later Akim Ndlovu, Robson Manyika, Gordon Bushe and Walter Mbambo.

He trained in military science together with Mutinhiri in the Soviet Union in 1964. Just before independence, Mphoko was appointed Zapu representative to Mozambique where he worked with South African President Jacob Zuma, Joe Modise and other African National Congress top brass.

Mphoko served Zimbabwe for more than 27 years as a diplomat beginning in Mozambique, serving in-between as consular between 1988 and 1992. Between 1996 and 2001, Mphoko served in Vienna, Austria as consular.

In 2002, he was appointed Zimbabwe’s High Commissioner to Botswana where he served until he was posted to Russia in 2005.
A trained agriculturalist, Mphoko was then posted to South Africa in 2010, replacing Simon Khaya Moyo until he was recalled this year.