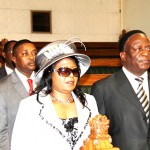 HARARE – UNKNOWN assailants yesterday broke into zanu-pf second secretary and Vice-President, Emmerson Mnangagwa’s party office and laced a deadly poisonous substance that left his secretary battling for her life in the Intensive Care Unit at a private hospital in Harare.

The intention appeared to be for Cde Mnangagwa to inhale the substance as soon as he opened the office and subsequently poison him to death. The nature of the substance could not be ascertained by the time of going to Press.

President Mugabe revealed the devious attempt after appointing the new Presidium and Politburo members at an extraordinary Central Committee meeting in Harare yesterday. The zanu-pf First Secretary and President appointed Mnangagwa and Phelekezela Mphoko as party Vice-Presidents, positions he said they would also hold in Government following the sacking of Joice Mujuru and the death of former VP, John Landa Nkomo.

“We are aware of people who really want to harm us, physical harm also,” said President Mugabe. “I was talking about the incident that happened kuma offices edu, ezanu-pf. The offices of Cde Mnangagwa were broken into last night and poisonous powder is spread all over the desk and so on.

“That powder, which when the door opens and there is that flash of air will be blown up and then he would breathe it. “So it was not Mnangagwa who opened the door, it was the secretary (Ms Catherine Magaya) who opened the door and poor girl there she was, she breathed it and she is a mess. She is in Intensive Care just now. Ko pamusana peyi? Chatatadza chii? Why? Why? Why? We want investigations to be done. I am just warning you that it’s not always those who smile at us are our friends. Take care!”
The Zimbabwe Republic Police confirmed the incident, saying investigations were underway.

“The Zimbabwe Republic Police has received a report to the effect that some poisonous substance was thrown into the honourable Vice President and Second Secretary of zanu-pf Cde Emmerson Dambudzo Mnangagwa’s office at the zanu-pf Headquarters last night,” said police spokesperson, Senior Assistant Commissioner Charity Charamba.

“We are not yet clear of the exact time. We wish to state that as ZRP, we are currently investigating this very serious incident and we strongly condemn this unlawful act and wish therefore to state that such acts of criminal sabotage and violence on senior Government and party officials will be dealt with and the culprits shall face the full wrath of the law which will be applied once the culprit are identified.

“We are appealing to anybody with information with regards to the incident to report to the nearest police station.” Sources said: “When she (the secretary) got into Mnangagwa’s office to tidy it, she saw some substance on the table and started feeling dizzy. That is when she called at Mnangagwa’s ministry advising them about the break-in and her condition.“A vehicle was immediately dispatched and took her to a private hospital in an unstable condition where she was admitted into the ICU. No visitors are allowed as her condition is bad.”

It is understood that Ms Magaya’s condition had improved by end of day yesterday. It is not the first time that Cde Mnangagwa’s offices have been broken into. Sometime in September his offices at the New Government Complex were broken into barely a month after Chief Justice Godfrey Chidyausiku’s Mashonganyika Building offices were also broken into with the assailants stealing a desktop computer and a television set.

A few days after the break-in at the Supreme Court, four judges reportedly lost keys to their offices, a development that prompted the Judicial Services Commission to urgently request police security at Mashonganyika Building which houses the Supreme and the Constitutional courts.

HARARE - UNKNOWN assailants yesterday broke into zanu-pf second secretary and Vice-President, Emmerson Mnangagwa’s party office and laced a deadly poisonous substance that left his secretary battling for her life in the Intensive Care Unit at a private h...
Share via
x
More Information