Wadyajena was arrested last month in Victoria Falls soon after the 15th Zanu-PF Annual National People’s Conference for uttering insults to Cde Jimayi Muduvuri, a Zanu-PF cadre based in Kadoma, and the insults were directed at the First Lady, the State alleged.

He was charged with criminal insult or alternatively disorderly conduct.

Making a ruling on the application for refusal of further remand made by defence lawyer Mr Givemore Muvhiringi, Ms Maphosa consented to the defence argument that the charge of criminal insult was unconstitutional after being declared so by the Constitutional Court.

“The defence made an application for refusal of further remand in relation to the two charges, the first one being criminal insult in terms of Section 95 of the code and an alternative charge of disorderly conduct,” she said.

The same could not be said of the alternative charge of disorderly conduct, Ms Maphosa said.

The MP will go on trial on February 1 on that charge.

Wadyajena (35) of Borrowdale Brooke in Harare, who is also the chairman of the Parliamentary Portfolio Committee on Youth, Indigenisation and Economic Empowerment, has not been asked to plead and is on $800 bail. 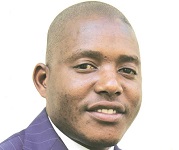