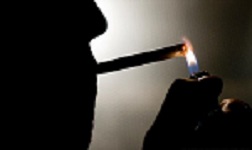 ZIMBABWE – Underage smoking is on the rise in Zimbabwe according the World Health Organization. The latest figures aren’t unusual for the region, but many in Zimbabwe fear tobacco use is just a smoke screen for more serious issues.

A recent survey by the World Health Organization (WHO) showed that 20 percent of young people between the ages of 13 and 15 are smokers in Zimbabwe. The research also noted that nearly 12.5 percent of the children started smoking at the tender age of seven.

Still, the news has caused a stir in Zimbabwe, where smoking is frowned upon – especially among young people.

In reaction to the WHO report, Lovemore Mumbengeranwa, who heads Zimbabwe’s Health Services Board, has called for new tobacco control and prevention programs in the country.

“This will save lives, reduce illnesses, and help reduce the economic burden associated with tobacco-related illness and lost productivity,” he said.

Recently, there have been other signs that Zimbabwe is starting to wake up to the dangers of smoking. In March 2015, Zimbabwe became the 180th country to ratify the WHO’s Framework Convention on Tobacco Control. The treaty regulates tobacco production, sales, advertising and taxation and aims to increase public awareness on the dangers of smoking.

The newest statistics on underage smoking are sure to spur on the implementation of measures to lower tobacco consumption.

Much more than cigarettes

For public health specialist Shungu Munyati action is certainly necessary. Munyati was in charge of the WHO-funded research in Zimbabwe. She told DW that smoking is merely the root of more serious problems.

She also thinks that when young people smoke, “it’s associated with a negative lifestyle: smoking, drinking and then comes risky behavior.” Munyati said such behavior “may lead to exposing oneself to HIV/AIDS and sexually transmitted infections.”

Indeed, for teenagers Bongani and Phathisani, cigarettes were just the first step on the road to substance abuse. They say many of their peers use prescription cough medicine or sniff glue.

“There are also tablets that you can take,” Bongani explains. “They are meant for people with mental health problems. They give you courage.”

He adds that people buy them from the mental health hospital, even though they are meant for patients.

But for 17-year-old Phatisani, economic factors are part of what led him to drugs. “If we had jobs, we would not be smoking and taking these drugs. If we had well-paying jobs no one would really bother with drugs.”

Phatisani feels there is no hope even if he passes his final school examinations. After all, the unemployment rate in Zimbabwe is estimated to be over 80 percent.

Smoking and selling tobacco products to people under the age of 18 is prohibited by law in Zimbabwe – but the findings of WHO show that the legislation in place is not being implemented.

That could be down to a conflict of interest. After all, tobacco plays a big role in Zimbabwe’s economy. According to statistics by the UN’s Food and Agriculture Organization, it is the country’s largest export commodity – and its most valuable one, accounting for nearly 10 percent of GDP (figures from 2011 and 2010).

“The law needs to take its course in terms of enforcing legislation so that young people do not have access to cigarettes. Because right now they can buy them and nobody really asks what age they are,” she says. Almost 38 percent of schoolchildren weren’t prevented from buying cigarettes because of their age, according to the WHO survey.

For Shungu Munyati, public awareness needs to play a bigger role in tackling the problem of underage smoking.

She thinks teachers should be banned from smoking in school buildings. “The whole thing also needs to be looked at terms of curricula in schools and health policies. We need to have programs that highlight the dangers of smoking.”

ZIMBABWE - Underage smoking is on the rise in Zimbabwe according the World Health Organization. The latest figures aren't unusual for the region, but many in Zimbabwe fear tobacco use is just a smoke screen for more serious issues. Seven months and two ye...
Share via
x
More Information