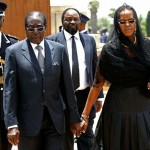 ZIMBABWE – President Robert Mugabe, on Saturday, surprised many when he delivered what should rank as his shortest ever address during the burial of a national hero at the shrine in Harare.

The 91-year old leader took only 17 minutes to address a sizeable crowd gathered for the burial of the late former cabinet minister and educationist, Sikhanyiso Ndlovu.

“The speeches are getting shorter and shorter every time he takes to the podium,” observed Nhlanhla Ngwenya, a media activist on Saturday.

He added: “It is unusual for the man known for long speeches and off-the-cuff snide remarks usually aimed at his opponents.

“Although the relevance of a speech should not be judged by its length but the depth of thought, the fact that the speeches are getting shorter could be confirming what the media have always speculated about; that he is getting exhausted.

“But that should not be worrying as it corresponds with his age. Very few people of his age would still muster that kind of energy.”

Mugabe, who now arrives at the national shrine holding arms with his younger wife, Grace, is known for defying his age with lengthy and often bombastic speeches lambasting enemies, both real and perceived.

He would often spend the first 30 or so minutes pontificating about his liberation war experiences in Shona before turning to his prepared English speech.

The speeches usually go for nearly an hour and a half, with the most memorable one being the one he delivered during the burial of the late Vice President Joshua Nkomo in 1999, which went on for up to two hours.

Only this week, political opponents feasted on Mugabe’s embarrassing speech howler which saw him spend nearly 26 minutes reading through the wrong text during the ceremonial opening of the current session of parliament.

Although stories of his failing health abound, Mugabe is yet to exhibit any clear sign he is unwell.

Meanwhile, the veteran leader praised his “ever smiling” former cabinet minister for his contributions both in liberating the country from colonial bondage and his post liberation efforts in improving the country’s education system.

“A broad and reserved, spontaneous and infectious smile is gone, gone forever from us,” he said.

“As he departs from this earth, he leaves us an illustrious life, well lived, an example of how commitment to a noble cause beats mortality, impacts durability beyond the transiency of ordinary life.”

Ndlovu suffered an asthma attack and a stroke which led to his death at the age of 78 at a Bulawayo private hospital.

He becomes number 112 among the country’s national heroes now interred at the national shrine.

ZIMBABWE - President Robert Mugabe, on Saturday, surprised many when he delivered what should rank as his shortest ever address during the burial of a national hero at the shrine in Harare. The 91-year old leader took only 17 minutes to address a sizeable ...
Share via
x
More Information
x