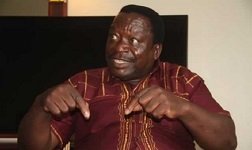 ZIMBABWE – The Zimbabwe National Liberation War Veterans Association (ZNLWVA)’s crunch indaba set for Harare tomorrow, hangs in the balance following police revelations that no clearance was issued for the former fighters to convene the meeting by late yesterday night.

According to police, the war veterans were supposed to meet some “certain” requirements they were given by the regulatory authority who is the Officer Commanding Harare Central District, Chief Superintendent Newbert Saunyama.

In an interview yesterday, chief police spokesperson Senior Assistant Commissioner Charity Charamba, confirmed that several conditions set were yet to be fulfilled.

“With regard for the war veterans meeting slated for Thursday, the ZRP has not yet cleared the war veterans. They recently approached the police and gave notice and said the venue was Zanu PF Headquarters and they were given some requirements by the regulatory authority that they should meet.

“However, today (yesterday) they came back starting afresh, saying that the venue was now City Sports Centre, changing their story,” she said.

Snr Asst Comm Charamba declined to disclose some of the requirements the war veterans leaders had failed to fulfil.

“The meeting can only be held when the conditions have been met,” Snr Asst Comm Charamba said.

The war veterans were set to convene their crunch meeting in Harare tomorrow and Defence Minister and Zanu-PF secretary for War Veterans Cde Sydney Sekeramayi had said that the gathering should be held under the spirit of unity and discipline.

The initial meeting, which was slated for February 18, was called off after it emerged the freedom fighters had not notified the relevant authorities, while police had not cleared it.

Police had to use tear smoke and water cannons to disperse the war veterans who had gathered at the City Sports Centre in Harare and their leader Cde Christopher Mutsvangwa later received a toungue-lashing from ZNLWVA Patron, President Mugabe for being irresponsible.

Cde Matemadanda said all was in place for the indaba.

“Police were notified and we have their permission in writing,” he said. “The meeting that failed to take place on the 18th of February is now going to be held on the 3rd of March at the Harare City Sports Centre because indications are that a lot of people are coming.

We want to thank the security Ministers, all of them, for seeing no danger in us holding this meeting.

We know comrades are going to come and on this note want to call all of them, those that were invited to come in their numbers for this very special meeting.”

Speaking in an interview yesterday, Cde Matemadanda said they had fulfilled the conditions of providing the venue details and that it was not double booked for their Thursday meeting.

“It’s only that I am driving from Kwekwe to Harare and I do not know what to say.

Under the law, members have just to notify the police if the venue is closed, its open space that need police clearance,” he said.

Cde Matemadanda said they never said the meeting would be held at the party headquarters, but City Sports Centre adding that he did not know of any conditions set by police which they failed to fulfil.

ZIMBABWE - The Zimbabwe National Liberation War Veterans Association (ZNLWVA)’s crunch indaba set for Harare tomorrow, hangs in the balance following police revelations that no clearance was issued for the former fighters to convene the meeting by late y...
Share via
x
More Information