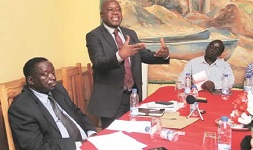 ZIMBABWE – The Zimbabwe National Liberation War Veterans Association (ZNLWVA) yesterday rallied behind its national chairman Cde Christopher Mutsvangwa and dismissed the vote of no-confidence passed against him and three others last week as null and void.

An emergency meeting was held under a tense atmosphere at a city hotel yesterday and was attended by provincial chairpersons and national executive members from all the country’s 10 provinces.

The solidarity messages were punctuated with the slogan “Pasi neG40”, with some members responding with “Pamberi neOperation Shumba’.

After the solidarity messages in support of Cde  Mutsvangwa, Cde Matemadanda was in a no-nonsense mood as he spelt out the agenda of the meeting which sought to adopt a special resolution to convene an emergency  general  meeting of the freedom fighters to look into the recent developments in the association, the party and the nation.

At the centre of recent developments, Cde Matemadanda said, was the recent abusive language and the vilification of the war veterans at a rally in Rushinga in October last year addressed by the First Lady and the emergence ‘within Zanu-PF of counter-revolutionary clique G40 (Generation 40)’.

“Recent developments notably, harassment, suspensions and expulsions of revolutionary elements within Zanu-PF in defiance of the party’s constitution and procedures, by or at the instance of G40. Dissipation of resources,” said Cde Matemadanda.

He said there was brutal and inhuman treatment of citizens by local authorities at the behest of Minister of Local Government Saviour Kasukuwere through the destruction of homes and livelihoods.

“Houses are being destroyed and women with babies just coming out of hospitals are being left homeless. It is like Zimbabwe has become a war zone like what is happening in the Middle East. This is wishing for the instability of the Middle East to be experienced in Zimbabwe,” he charged.

“We are seeing bulldozers of America destroying and killing our companions in that country. This is what is happening here.”

Cde Matemadanda also talked about paying lip service to the plight of the people.

“Some people are dying of hunger yet there are people who are bragging and showing off their riches. Rich people who live in luxury after acquiring homes for free while the ordinary people suffer. War veterans did not suffer for those in positions of authority. No! We suffered for the ordinary people who were being abused by the white man. We are saying no to that.”

He said instead of stemming corruption, the corrupt people were being awarded.

Cde Matemadanda also said recently the country witnessed the violation of the constitution and rule of law when police arrested Prosecutor-General Mr Johannes Tomana in connection with the bombing of Gushungo Dairy. He said Mr Tomana was tried and sentenced to one-year in prison while he was out of the country on state business.

“Where else have you seen a Prosecutor General being tried and sentenced while in the west or north Africa? He was sentenced to a year in prison. Imagine this is a man you entrusted as the custodian of your laws. He is arrested, tried and sentenced while he is far way from his country. You shove him in an open truck. You are humiliating your own constitution. You want us to be persuaded by somebody  to see that this is nonsense.”

In other countries, he said, if you burn an army uniform you risk being charged with treason.

“A soldier is a symbol of the State. But now the military has been made child’s play at rallies. Soldiers take allegiance oaths and even if you scold him, he cannot answer back. We are soldiers because once a soldier, always a soldier,” he said.

“But we know the conditions under which they live sacrificing their lives. Even the young ones who went to war to protect Zimbabwe’s interests in Mozambique, Somalia, more recently DRC, everywhere. They died, but they have not been respected by the people they protected. Vanhu varikuenjoya maresources avarikuchengeta vanhu ivavo. Musoja anotaurwa parally. Musoja anotongwa ne Defence Forces Act.”

This, said Cde Matemadanda, showed that the centre is being disturbed.

“The powers of the State are not given to two or three people. It is one and that one is President Mugabe”.

Cde Matemadanda said they know where all these machinations are leading to. He said the West and all those with regime change agenda knew there would be a reaction to this. He said the freedom fighters fought the Smith-regime and would not be intimidated.

Cde Matemadanda asked what crime the freedom fighters committed for them to be insulted.

Turning on tribalism, Cde Matemadanda said there is no place for ethnicity slur in Zimbabwe. He said some people were seeking to divide and confuse the nation through promotion of tribalism at a rally in Chiweshe last week.

He said as war veterans they were shocked by the song “MaZezuru unconquerable” and berating the Karangas.

He said in Zimbabwe people are one, fought the war as one and would remain one people. This country, he added was not for the Zezuru, Kalanga, Venda, Tonga or Ndebele but Zimbabweans.

Cd Matemadanda said the G40 machinations have created a real crisis which called for urgent resolutions.

“This is a deliberate G40 scheme backed by certain western powers, to emasculate the association and the party and thus precipitate a national crisis through paralysis and capture of State and Zanu-PF power by G40,” said Cde Matemadanda.

“The gravity of the situation and importance of the matter to freedom fighters and the general citizenry requires that the matter be given serious attention through debate and resolution by the general congress of members.”

Speaking at the same occasion, Cde Mutsvangwa said he would take the special resolution adopted by the national executive to President Mugabe, who is the patron of the association for his consideration and map the way forward.

He assured the freedom fighters that President Mugabe has an ear for the war veterans because he was part of them.

He said the war veterans had nothing to fear.

“You are the angels of revolution. You are President Mugabe’s angels, and angels for the departed heroes of the struggle,” said Cde Mutsvangwa.

He said Zimbabweans would be happy and in peace to hear that freedom fighters met and discussed the events occurring in the country.

“You are here in civilian clothes and your colleagues in uniform- you know them. They too, will be happy and will sleep tight today because of this meeting,” said Cde Mutsvangwa adding, “You have calmed the situation.”

Mugabe ‘relative’ gets 35 months for fraud

ZIMBABWE - The Zimbabwe National Liberation War Veterans Association (ZNLWVA) yesterday rallied behind its national chairman Cde Christopher Mutsvangwa and dismissed the vote of no-confidence passed against him and three others last week as null and void. ...
Share via
x
More Information
x