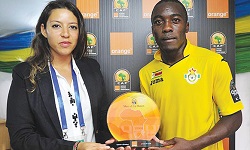 ZIMBABWE – THE Warriors’ bid for a flourishing finish in their otherwise disappointing African Nations Championship (Chan) football journey was blown away after they conceded an injury time goal to draw the final Group D game against Uganda.

With that result yesterday, Zimbabwe finished bottom of their pool with just one point from three matches, while Uganda ended with two as Mali joined Zambia in the quarter-finals from the group.

The Warriors, who are expected back in the country from Kigali this afternoon, went into the match already eliminated from the tournament, but a win was important for their pride.

Zimbabwe thought they had bagged maximum points after leading until the last of three added minutes only for Geofrey Serenkuma to pounce with a headed goal to cancel out William Manondo’s 48th minute strike. The Harare City forward was voted man of the match.

Coach Kalisto Pasuwa could not mask his disappointment with the result after the match.

“It was the same story for us. We missed many chances and at the end there was a lapse in concentration for us to concede that goal. I am so disappointed,” he said.

The Uganda equaliser broke the Zimbabweans’ hearts, as they would have at least finished third in the group, but the Warriors only have themselves to blame after missing a catalogue of chances in the second half.

Goalscorer Manondo, who got his first start in the tournament alongside Joel Ngodzo, Raphael Manuvire and Bruce Kangwa, was guilty of squandering good opportunities, which if taken, would have given Pasuwa’s men a comfortable win and at least something to show for their efforts here.

Zimbabwe’s performance was not particularly assured, but they still fashioned a hatful of opportunities and could have won the match by a wide margin.

Uganda’s goal undid an otherwise brilliant performance by Warriors goalkeeper Tatenda Mukuruva, who denied The Cranes with good goalkeeping in both halves.

Had it not been of Mukuruva’s brilliance, Uganda would have created daylight between themselves and Zimbabwe in the first half.

Manuvire and attacker Edmore Chirambadare were both lethargic, while Rodreck Mutuma might have produced the miss of the tournament when he shot wide from the six-yard box, with the goalkeeper at his mercy just before the half-time whistle.

The Warriors failed to produce a single shot on target in the first half with Ngodzo, playing in the midfield always intent on playing the ball back to the defenders.

In the first half Mukuruva denied Faruku Miya and Isaac Muleme while other Uganda attackers had their shots going wide.

After the break, Zimbabwe came back a different side, Ngodzo was more positive, while Chirambadare was also more effective.

They soon took the lead when Manondo stole possession in the opposition final third, outpaced his marker and blasted the ball past goalkeeper Alitho James.

From that point on, more chances came Zimbabwe’s way and most of them fell to the Harare City man, but he failed to reproduce the same precision.

On the other hand, Mukuruva kept on frustrating the Ugandans, who were giving it everything.

His performance was the only thing that Pasuwa could draw pleasure from and it looks like he might have won himself the number one shirt for the Africa Cup of Nations qualifiers.

“I am pleased with Mukuruva’s performance today, he has done well for the national team in the past and we will be using him in the upcoming matches.”

The forwards once again let the team down particularly in the second half where Chirambadare could have helped himself with a goal and Manondo a couple more.

Substitute Moses Demera, who was also disappointing, set up Chirambadare, but the Chicken Inn striker produced a tame shot, which the keeper gathered comfortably after 57 minutes.

Manondo stabbed his effort wide at the end of a Ronald Chitiyo free kick, before he was denied by brilliant goalkeeping late on.

Just before Uganda’s equaliser, Zimbabwe could have scored a second, but failed to make use of a three-against-two situation on the break, to surrender possession and were ruthlesssly punished. Manondo the guilty part.

ZIMBABWE - THE Warriors’ bid for a flourishing finish in their otherwise disappointing African Nations Championship (Chan) football journey was blown away after they conceded an injury time goal to draw the final Group D game against Uganda. With that re...
Share via
x
More Information