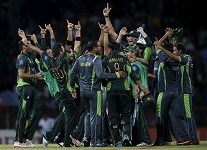 Now the action shifts to the ODI series, where Pakistan will eye a clean sweep in the three-match ODI series. The first ODI match of the series is scheduled for Thursday at the Harare Sports Club.

Shahid Afridi, who led Pakistan superbly in the T20 series, is not a part of the ODI series as he has retired from the format. Hence the team will be led by Azhar Ali, who captained the side brilliantly in the last series against Sri Lanka.

The men in green have been in decent form of late in the fifty over format as they come into this ODI series after a huge win against Sri Lanka. It was a victory in which all their batsmen and bowlers stood tall.

However, the recently-concluded T20 series against Zimbabwe has been a major disappointment from the batting prospective for Pakistan.

The opening pair of Mohammed Hafeez and Ahmed Shehzad have been hugely disappointing. None of their batsmen failed to come up with a half-century even. Senior players in the team like Shoaib Malik need to shoulder more responsibility in the middle order.

In both the T20 matches, it was their bowlers, who helped Pakistan emerge victorious. But, Pakistan cannot depend on their bowlers alone; their batsmen have to step up the game. Hence skipper Ali needs to lead the team from the front and come up with an inspiring performance with the willow.

Bowlers such as Imad Wasim, Sohail Tanvir and Wahab Riaz bowled a brilliant line and length throughout the series and Ali will ask for a similar performance from Riaz, who is one of the best bowlers for Pakistan.

As far as their opponents are concerned, Zimbabwe must have one of their consistent players, Elton Chigumbara, higher up in the batting order as he not only adds stability, but also lends experience. Big hitters such as Sean Williams can bat in the lower order, where he is might be dangerous.

Where to watch live

Viewers in the US can watch the game live on Willow TV with live streaming Willow TV online.

ZIMBABWE - The recently-concluded T20 series featuring Pakistan and Zimbabwe had their fair share of thrills and spills, with the men in green emerging victorious after defeating the African nation in both the T20 matches.Now the action shifts to the ODI s...
Share via
x
More Information