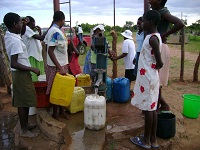 ZIMBABWE – Water woes in some parts of Harare are worsening prompting residents to look for alternative sources of water, exposing them to waterborne diseases.

Residents in areas like Highfield, Glen View, Glen Norah, Budiriro have gone for days without the precious liquid and they have slammed the Harare City Council for turning its back on them.

The water crisis could soon expose the desperate residents to waterborne diseases as some are resorting to unclean sources of water.

The country has already recorded more than 500 deaths due to waterborne diseases since January according to a Ministry of Health and Child Care surveillance report.

Some residents in Highfield argued that back in the day, the city fathers used to provide water tanks whenever they were water challenges but that has since stopped and they have normalised water challenges.

“We have gone for almost a week without water and I spend most of the time searching for water in the industrial areas where they are boreholes.

“There is also a risk of being hit by cars as we cross the busy roads with water buckets on our heads. We have a council that just does not care about people because they have normalised this water crisis situation.

“Back in the day, we would have water bowsers whenever they were water challenges but now they don’t do that anymore,” said gogo Shumba from Highfield.

A Glen Norah resident, Slivia Moyo said they have resorted to using water from Mukuvisi River as the water situation continues unabated, oblivious of the risk of using the unprotected source.

“For my laundry and dishes, I use water from Mukuvisi River because the water I get from the available boreholes is not enough for house hold chores.

“It’s the same water that we use for bathing and for the toilets as we have been left with no option because the boreholes would be congested,” she said.

“We have been turned into villagers by the Harare City council as we are always carrying buckets fetching for water.

“Some of the wells that we used to get water from have since gone dry and we are left with very little options. You cannot survive without water,” added another Highfield resident.

The Ministry of Health and Child Care also blames the local authority for its failure to provide clean water adding that waterborne diseases cases have remained high due to poor water and sanitation.

“We can’t eliminate diarrhoea without addressing the root causes which are hygiene, sanitation, open defecation.

“All these waterborne disease are preventable and all the country needs is a concerted effort to address the determinants which are already known.

“Typhoid and Common diarrhoea cases remain high because their determinants like adequate, safe water, sanitation and hygiene remain unavailable or continue to have very low coverage,” she said.

Commenting on why the local authority is struggling to provide uninterrupted water supplies, Harare City Council spokesperson Michael Chideme said they were aware of the challenges adding that they were working flat out to address the woes.

“We are aware of those challenges that are also caused by old infrastructure. We are already working on refurbishing the whole system and that will soon be a thing of the past.

“We also urge residents to pay their water bills so that we are able to function,” he said.

ZIMBABWE - Water woes in some parts of Harare are worsening prompting residents to look for alternative sources of water, exposing them to waterborne diseases. Residents in areas like Highfield, Glen View, Glen Norah, Budiriro have gone for days without th...
Share via
x
More Information
x