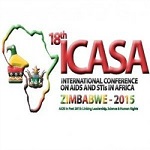 ZIMBABWE – A coalition of gays, lesbians and transgender people has claimed that had it not been because of their efforts Zimbabwe may not have hosted the just ended 2015 International Conference on HIV/AIDS and Sexually Transmitted Infections in Africa (ICASA).

African Men for Sexual Health and Rights (AMSHeR) said they defended Zimbabwe’s bid to host the event after some influential people had called for a global boycott.

Zimbabwe is known worldwide for its anti- gay stance which President Robert Mugabe always expresses whenever he gets to the podium, locally, regionally and internationally.

Mugabe at one point threatened to take action against any western diplomat who supported gay activities.

In an interview with NewZimbabwe.com in Harare, where AMSHeR was taking part in the just ended world AIDS conference, the organisation’s executive director Kene Esom said had it not been for their support Zimbabwe would have lost the bid to host the event which has also earned the country some millions of dollars.

Esom’s comments came after what he thought was harassment of gays by the government during the just ended event.

When Zimbabwe was announced as the venue of this conference, you can imagine, there was a lot of concern, in fact there was a global call to boycott the event, he said angrily.

We led a joint assessment mission here in July where we spoke to members of cabinet, the Ministers ofÂ Health and Tourism and the National AIDS Council; we laid these things on the table and we said until we are given assurances we will not be here and they gave us the assurances and that is why our communities are here, our allies, theÂ donors and our partners are here because they were concerned about key populations.

But when AMSHeR arrived for the event last week, government confiscated their conference material demanding that they should pay an excise tax on the books and brochures.

The gays also had their exhibition stand pulled down because of colorful and attractive messaging on their posters and banners.

ZIMBABWE - A coalition of gays, lesbians and transgender people has claimed that had it not been because of their efforts Zimbabwe may not have hosted the just ended 2015 International Conference on HIV/AIDS and Sexually Transmitted Infections in Africa (I...
Share via
x
More Information
x