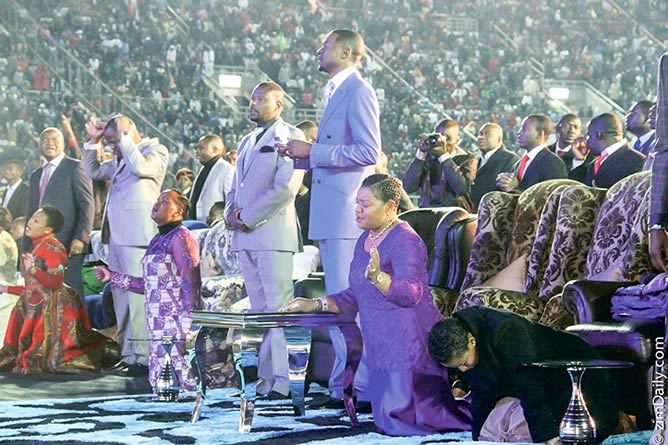 Prophet Makandiwa declared the cancellation of debts for all the people who attended the prayer meeting dubbed ‘Judgment Night 3’ who filled the 60 000 National Sports Stadium seater and the multitudes shouted Amen Papa, we receive.

Among the multitudes were followers with hummers and knob carries presumably carrying them as a sign of hitting the enemy. “We are a ministry not to tamper with and we kill all our enemies,” said Prophet Makandiwa giving prophecy to one of the people he said was suffering and facing mishaps because of an evil object planted in one of his parked vehicles.

“God is for all the flesh and it is upon us to seek his power to overcome all evils and pray for our nation to enjoy what God has for us who believe,” he added. He led the people into prayers for nations saying the peace of nations is where the success of people came from and hence the need to pray for nation.

“Mwari ndiMwari wenyama yose and great things will be seen on you and God will be glorified though you,” said Prophet Makandiwa. “The time is coming where we will not use posters to market our gatherings since you will be our testimony for great works being experienced through us.

“Whoever is going to stand on your way and for your sake they are going to fall and those tormenting you will throw what they value and pick up what you value. “You are going to be our posters and peace and tranquility will prevail among those who believe and I declare a blessing to all who are gathered here tonight,” he said as people shouted I receive.

Prophet Makandiwa was moved by the multitudes who gathered in the chilling weather and declared that whoever attended the meeting would be blessed. He went on to prophecy that there are oil reserves in one of the places shown to him in prayer and urged people to respect leadership and develop a prayerful life.

He took a swipe on nations renouncing their values urging Zimbabweans not to forsake their values by engaging in an ungodly manners. UFI praise and worship team including gospel artists such as Charles and Olivia Charamba led the people into prayer ahead of the arrival of Prophet Makandiwa who went on to share a sermon about God’s love.