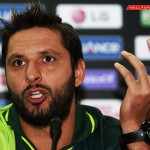 ZIMBABWE – Pakistan will take nothing for granted when they clash with minnows Zimbabwe in a two-match Twenty20 International series in Harare, skipper Shahid Afridi announced on Wednesday.

The star all-rounder told ‘The News’ that with next year’s ICC World Twenty20 championship just six months away, his team will see the two games to be played at the Harare Sports Club on September 27 and 29 as vital opportunities to gain good match practice.

“Zimbabwe might not be ranked among the top teams in the world but they remain a good side in limited-overs matches,” Afridi said before the team’s departure to Zimbabwe. “The two matches we play against them will be an excellent opportunity for my players and team officials and we plan to use them as a launch pad for the T20 World Cup. We won’t take the matches lightly,” he added.

Afridi’s Twenty20 unit has been on the rise following a series of wins and the captain believes that the team will show more improvement in the lead up to the World Twenty20 championship to be hosted by India in March-April next year.

“I’m happy with the progress our team has been making in the lead up to the T20 World Cup,” he said.

Pakistan are scheduled to play T20Is against Zimbabwe, England (in UAE), and New Zealand ahead of the T20 World Cup in India. “We have ample number of matches for the boys to get fully ready for the World Cup and I’m confident that our team will peak at the right time,” he said.

Pakistan lost the final of the 2007 World Twenty20 to India by five runs in what turned out to be one of the most thrilling contests between the two sides of all time. They however, went on to script their biggest achievement in international cricket in 17 years when they beat Sri Lanka by eight wickets in the final of the 2009 edition at Lord’s be crowned T2oI champions.

However, their Twenty20 graph dipped to an all-time low when they failed to make the cut for the semi-finals for the first time in the history of the World twenty20 championship in its previous edition held in Bangladesh last year.

The two-match T20I series will be followed by three One-day Internationals against Zimbabwe in Harare.

ZIMBABWE - Pakistan will take nothing for granted when they clash with minnows Zimbabwe in a two-match Twenty20 International series in Harare, skipper Shahid Afridi announced on Wednesday. The star all-rounder told ‘The News’ that with next year’s I...
Share via
x
More Information
x