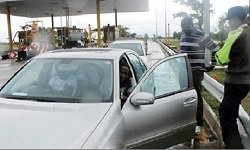 ZIMBABWE – Chegutu East legislator Webster Shamhu was on Friday involved in an accident when his stationary car was hit by a Honda Fit pirate taxi, popularly referred to as mshikashika.

The accident occurred at the intersection of Robert Mugabe Way and Sam Nujoma Street where the former cabinet minister’s Ford Ranger was parked behind his wife’s Mercedes Benz.

Witnesses said the 23-year-old pirate taxi driver, Simbarashe Mutumba, was speeding at the intersection where traffic lights have not been working for a long time.

Father and son injured in an accident